Home / Normal / The only cure for Libya is diplomacy, military restraint and patience 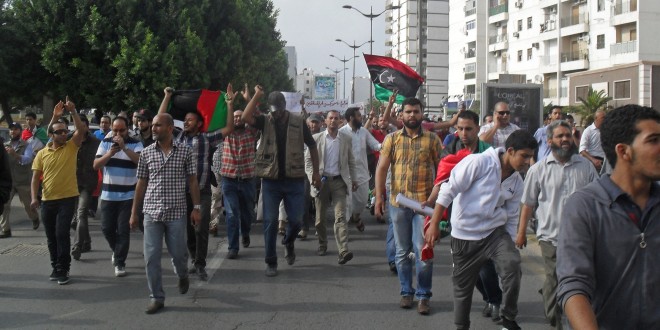 The only cure for Libya is diplomacy, military restraint and patience

The Islamic State of Iraq and Syria (ISIS) is implementing its strategy of atrocities with gruesome skill. After Iraq and Syria, the group is using Libya to force outside states to react on the basis of emotions, not strategic thinking. The beheading of 21 Egyptian Christians persuaded Egypt to bomb militant camps on Libya’s coast and to launch a diplomatic offensive at the U.N. Security Council to authorize military operations on Libyan soil.

The examples of Iraq and Syria, not to mention NATO’s 2011 campaign in Libya, should be enough to make us stop and think. Bombardment alone cannot replace a political strategy, even if in Libya – a country with Sunni majority – ISIS cannot feed off the same sectarian claims that helped it in Iraq and Syria.

The group controls a limited area and has only around 1,000 men spread between towns it claims to control like Derna, Sirte and Nawfiliya. Its recent attacks on oil fields, assassinations and kidnappings, as well as the beheading videos do not amount to a military or political strategy. Rather, the group uses these to instil a sense of fear and chaos. One should not therefore be duped by those from Libya’s rival Tripoli or Tobruk administrations who use the IS threat as a propaganda tool to whip up external support.

The real strategic threat is the fragmentation of Libya, the anarchy in which trafficking of all kinds can flourish. This creates fertile ground for jihadis who, in turn, are able to present themselves as the guardians of order. The risk is that ISIS will be able to attract vulnerable individuals, Islamist groups, criminals, former Qaddafi loyalists and tribal leaders who lost power following the 2011 revolution.

Furthermore, foreign fighters have sought refuge in towns like Derna, where jihadis have set up training camps. Radical groups that came from the Sahel and have settled in southwest Libya and can threaten to destabilise other fragile states like Niger and Mali. But air bombardment will not halt such developments. Quite the contrary: the south of Libya is not, at least not yet, the jihadi sanctuary others claim it to be. A military operation against a country that is today divided between two rival administrations will not solve anything. Worse, it could even provide extremist movements with a convenient adversary.

The reality is a high-stakes strategic problem that, left neglected, will result in a jihadi crescent from Nigeria’s Boko Haram to Syria’s ISIS that threatens the gates of Europe

The priority is therefore to give diplomacy a chance. Libya today is divided between one side that presents itself as moderate in Tobruk, but whose opponents present it as Qaddafi loyalist, and another side that presents itself as the guardian of the 2011 revolution but whose opponents present it as dangerously Islamist. These descriptions do not do justice to a complex reality in which personal ambitions and tribal loyalties play a significant role. In Tobruk as in Tripoli, political leaders seem preoccupied with asserting their own authority rather than fighting the spread of Islamic State. The outside world must resist the temptation to ship weapons to either side and should instead strengthen the much-violated arms embargo currently in place.

This will not be possible unless the international community is truly united in its policy toward Libya rather than exporting its own internal disputes. Egypt’s fight against the Muslim Brotherhood cannot justify support for General Haftar, who bases his policy on the illusion of a military solution that will “crush the Islamists.” The West should not attempt to intervene militarily to exclude the hardliners from both camps. It should do the opposite, namely, support the U.N. Special Envoy Bernardino León in order to attract both camps into inclusive negotiations.

The U.N.-sponsored talks have failed so far, yet they remain the best chance for peace. More importantly, we should – at any price – support whatever left of Libya’s unity and protect the neutrality and independence of its central bank and management of petroleum resources. The alternative would be a catastrophe: a prolonged war where both camps have the financial means to survive it.

The Europeans today only see Libya through a humanitarian lens: Again as “boat people”, taking advantage of a state collapse and an unguarded coastline to try to reach Europe’s Eldorado. But the reality is a high-stakes strategic problem that, left neglected, will result in a jihadi crescent from Nigeria’s Boko Haram to Syria’s ISIS that threatens the gates of Europe. The solution is not military but political.

Jean-Marie Guéhenno is the President and CEO of the International Crisis Group. Until his appointment, he was the Arnold Saltzman Professor of Professional Practice at Columbia University and the director of its centre for international conflict resolution (School of International and Public Affairs). He is also a non-resident Senior Fellow at the Brookings Institution.
In 2012, he was appointed deputy joint special envoy of the United Nations and the Arab League for Syria. He left that position to chair the commission appointed by President François Hollande to review the French Defense and national security posture. Between 2000 and 2008, he served as the United Nations’ Under Secretary-General for Peacekeeping Operations. A former French diplomat, he held the position of Chairman of the Institut des Hautes Études de Défense Nationale between 1998 and 2000, and served as director of the French policy planning staff and as ambassador to the Western European Union.
Issandr El Amrani is the North Africa Project Director at the International Crisis Group. Based in Rabat, Issandr has worked across the Middle East as a journalist, commentator and consultant and was previously Crisis Group’s North Africa Analyst. His reporting and commentary on the Middle East and North Africa has appeared in several outlets including The Economist, London Review of Books, Financial Times, The National, The Guardian, Time. He is the founder of The Arabist, one of the longest-running blogs in the region.

Political TransitionSecurity Situation
All
2015-04-10
activate
Previous Putin Has No Plans to Meet With Libyan PM on April 14 – Spokesperson
Next Malta: don't return migrants to Libya