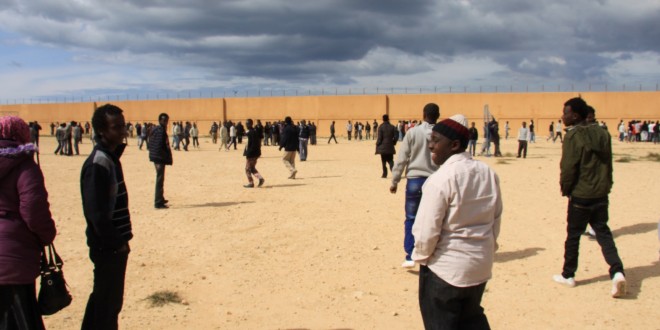 Tripoli leaders use migrant issue as they yearn for recognition

Europe cannot halt the deadly traffic of African migrants across the Mediterranean unless it ends a boycott of forces that have seized power in the Libyan capital and helps authorities there cope, the de facto government in Tripoli said.

Chaos and civil war since NATO warplanes helped topple dictator Muammar Gaddafi in 2011 have turned the North African country into the launching point for human traffickers smuggling tens of thousands of people across the Mediterranean.

Libya’s rulers have rounded up thousands of Europe-bound African migrants in makeshift detention centres. But officials say they have no room to hold the migrants, no way of fighting smugglers and no hope of guarding vast desert frontiers to prevent thousands more people trying to reach the sea.

“We tell you: come and talk and cooperate with us, the national salvation government,” Mohamed al-Ghirani, foreign minister in the government based in the capital Tripoli, told Reuters in his office overlooking the Mediterranean.

“If Europe doesn’t cooperate, then after (some) years Europe will be completely black. Europe will change from a white Europe to an African Europe,” he said.

The lack of any unified authority in Libya has prevented virtually all international cooperation to respond to the migration crisis. An EU team helping to train and advise Libyan border guards evacuated the country.

Nearly all European countries have withdrawn their embassies from Tripoli and refuse to recognise Ghirani’s government, which took control of the capital in heavy fighting last year.

Instead, they recognise a rump government now based in the east.

After 800 migrants drowned in the shipwreck of a fishing boat last month, European leaders agreed at an emergency summit to strengthen naval patrols off the Libyan coast to fight the smugglers.

But Ghirani said such efforts were pointless unless Europe began cooperating with his government’s forces on the ground.

“Now we cannot do anything. The state is weak,” he said. “We need logistics, intelligence, aircraft.”

Ghirani said Libya had detained more than 16,000 mostly African migrants in overcrowded detention centres. Some were being housed in abandoned schools and other public buildings.

At a detention centre in Gharboulli east of Tripoli, almost 100 people shared one cell with a single toilet. Men were segregated from women, some of whom were pregnant, lying on mattresses next to each other on the floor.

Detainees are allowed to leave the crowded cell only briefly to meet visitors.

“This place is not fit for human beings. We don’t get fresh air in the cell and many are sick,” said 24-year old Eritrean Mussie Tolde who has been held for two months since the Libyan navy stopped the crowded boat on which he tried to reach Italy.

Authorities struggle to provide medical care for detained migrants, many of whom arrive exhausted or undernourished from weeks in overloaded trucks driving across the Sahara, said the centre’s deputy director, Faraj Abdullah.

“A doctor comes for a day or two, but it’s not enough.” Another detention centre in the city of Misrata further east was so full even the floor outside the cells was packed with migrants. Hundreds shared one toilet.

Shouting broke out when one person got up to get some air.

Since an alliance of rebels seized Tripoli last year and the internationally-recognised leadership fled to the east, Libya has had two rival governments, fighting a civil war.

Both field “armies” formed mainly of loose coalitions of rebel groups that fought against Gaddafi, funding themselves out of Libya’s oil revenue.

Some parts of the country are also in the hands of Islamist groups, including fighters who proclaim allegiance to Islamic State, the group that controls much of Syria and Iraq.

The chaos has given free rein to people-smugglers, who have set up a vast trafficking trade, charging thousands of dollars to bring migrants across the desert from sub-Saharan Africa and pack them into unsafe boats for the trip across the sea.

More than 170,000 migrants successfully crossed the Mediterranean from Libya last year, and more than 3,000 drowned at sea. The International Organization for Migration forecasts the number attempting the journey – and the death toll – could both increase by several times this year.

Colonel Mohamed Abu Breeda, assistant director of the illegal migration department at the Tripoli government’s interior ministry said he had 8,000 men to cover the vast desert country and lacked vehicles and weapons to guard its desert borders.

“Our possibilities are very, very limited. We cannot do anything without support from the European Union,” he said. “The southern borders are open without any monitoring…. The smugglers have weapons, better capabilities.”