Home / Normal / Is Libya on the eve of fresh military operations? 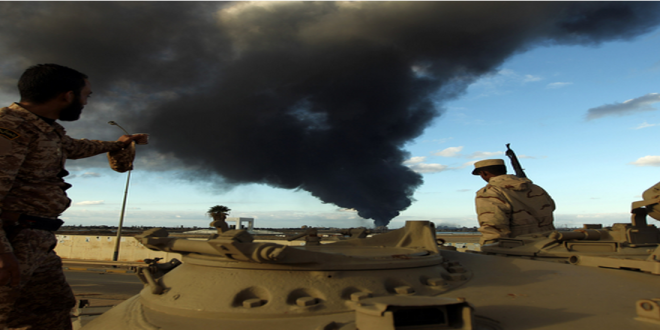 Is Libya on the eve of fresh military operations?

The momentum towards the beginning of an Egypt-led coalition operating in Libya may be gaining steam. The launch of full-blown air sorties and special operations could be expected, in what would be a move to enhance General Khalifa Haftar’s “Operation Dignity.”

In eight months of fighting, Haftar’s forces with their emerging and evolving concept of operations, have bludgeoned their way to superiority.

About two weeks ago, the not so secret meeting of Arab defense ministers and other officials took place in Cairo. Subsequent planning by the participants resulted in further analysis of the fluid nature of the Libyan battlefield. France and Italy are backing Cairo with their usual activity that includes intelligence, surveillance, and reconnaissance (ISR).

But Algeria may be sitting out of the Egypt-led coalition. Algiers is worried that if Dignity wins the war, Egypt as its key ally will enjoy key influence in Libya. Consequently, Algeria’s lack of cooperation signals that the Egypt-led coalition’s air operations would be relied upon with support by the Zintanians and critically, the Warfalla tribe, who are now on board with Egypt.

Speaking of Libya tribes, a few days ago, over 420 Libyan tribal leaders reportedly gave their approval for a fresh military offensive. These Libyan tribal leaders met in Cairosponsored by the Egyptian Council for Foreign Affairs. The tribal leaders agreed to form a Tribal Council, with members to be named by the Libyan parliament, the House of Representatives (HoR) in Tobruk, which will be tasked with national reconciliation as well as developing Libya’s relationship with neighboring countries. It is interesting to note that the assassination attempt on Tobruk’s Prime Minister Abdullah Al Thinni occurred during the tribal meeting in Cairo.

The Libyan tribal leaders, at the conclusion of a conference in Cairo, said they refuse any dialogue with Islamist groups, including the Muslim Brotherhood (MB), asserting that it is a “terrorist organization.” In other words, the Tripoli government, made up of the MB and former fighters of the al-Qaeda linked group, the Libyan Islamic Fighters Group (LIFG), and is the target in the coming weeks; Tripoli is to be taken away from the extremists. Part of the strategy is to get the Misratans to break away from Tripoli to join the Egypt-led cause. Misrata, of course, is Libya’s third city and biggest port and strategically noteworthy. Significantly, Libyan tribalism always trumps religion and localism.

To boot, and making the situation more urgent, is that ISIS in Libya is expanding beyond their port areas of Sirte and Derna. Overall, from the Egyptian-led coalition point of view, there is a great amount of strategic and tactical work to be done. That the first anniversary of ISIS occurs on the first day of Ramadan 2015 cannot be allowed to be a joyous occasion for the Libyan-based appendage of the false caliphate.

An Egyptian-led coalition would have notable goals. But there may be some unintended consequences

Russia and China are reportedly getting involved too in Libya. We all know that the Kremlin is supplying weapons to the Tobruk government via Egypt with various types of kit for land operations, communications, and additional maintenance equipment. Interestingly, Moscow, and China, are upping their naval presence in the Mediterranean. The Russian and Chinese navies (Peoples Liberation Army Navy) recently held their first joint exercise with nine warships, Sea Cooperation-2015, in the Mediterranean Sea.

It is important to recall that PLAN ships have been a part of the maritime security environment in the Mediterranean Sea before NATO operations over Libya in 2011. In that year, the Chinese Navy evacuated 30,000 Chinese workers from Libya. For the current exercise, China dispatched ships that had been involved in an anti-piracy mission off the Horn of Africa. It is quite possible that both Russian and Chinese navies will be participating with an Egyptian-led coalition in one form or another, quietly but saliently. If true, this development challenges nominal thinking about geo-politics and geo-security in North Africa.

The United Nations and the European Union’s dithering is leading up to this decisive moment. A few weeks ago, the United Nations issued a mediated Libyan Political Agreement for consideration by all sides. Tripoli’s Prime Minister Khalifa Al Ghwell said that there is “no chance” at a unity government and that the country is “heading for partition.” In addition, EU foreign and defense ministers met amid fanfare to announce decisive military action to tackle the migrant crisis flowing through Libya towards the soft underbelly of Europe. But EU action will not happen until July. And even then only if the U.N. agrees, which it probably will not. So Arab action must be taken now.

The United States appears to be stuck even more in its internal politics than focusing on what is about to unfold in North Africa. Due to the fact that the American presidential election season is starting in the United States, Republicans are coalescing around the Obama Administration’s failed policies towards the Middle East and specifically on former Secretary of State Hillary Clinton’s record on the killing of Ambassador Christopher Stevens in Benghazi on September 11, 2012. At this time, the Arab states see the internal politics of Washington DC on Libya as a joke and is contributing to the will of an Egyptian-led coalition and General Haftar to time their operations sooner rather than later.

Overall, an Egyptian-led coalition would have notable goals. But there may be some unintended consequences. First, the Qaddafi tribe is part of tribal alliance that met in Cairo and it could be that Qaddafi family members will be active in the new Libya. Second, General Haftar may be forced to act on behalf of the Egyptians rather than to the government in Tobruk. Although some disagreements may occur, the strategic and tactical goals are more important. Clearly, the opening of this new front in Libya by an Egypt-led coalition would continue to illustrate how central Libya’s future is tied to the forces that want a stable and peaceful Libya.

Dr. Theodore Karasik is a Gulf-based analyst of regional geo-political affairs. He received his Ph.D in History from UCLA in Los Angeles, California in four fields: Middle East, Russia, Caucasus, and a specialized sub-field in Cultural Anthropology focusing on tribes and clans.