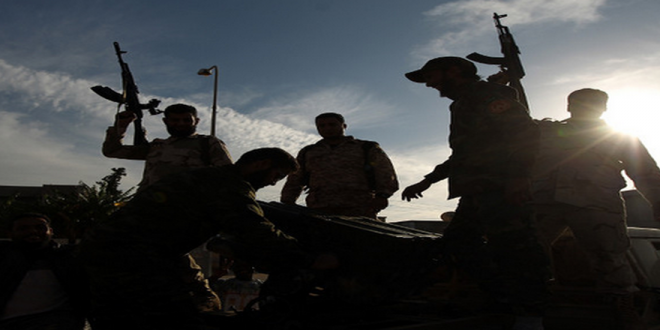 Hardline Misrata political figure Saleh Badi has set up a new, smaller successor to the Libya Dawn military alliance which has been falling apart over the past two months.

The new grouping, in effect Libya Dawn Mark-2, has been called the Steadfastness Front and comprises some seven Misrata brigades plus almost all those in Tripoli which were part of Libya Dawn Mark-1. These include the Tripoli Revolutionaries’ Brigade led by Haitham Tajouri, the Nawasi Brigade and the Rada forces led by Abdul Rauf Kara, the Mobile Forces and the Janzur Knights (Fursan Janzur).

The declared aims of the grouping are, according to a statement, “to protect the security of the capital” and secure its occupants from abductions and attacks. It would do so, it said, with “an iron fist” and would not be open to any compromise.

In effect, however, its immediate aims are to prevent further haemorrhaging of Libya Dawn, stiffen resolve among those remaining, and ensure that the coastal road from Tripoli to the Tunisian border stays under its control.

The latter is seen as crucial. The disintegration of Libya Dawn 1 started in April with two of the largest Misratan brigades, Halboos and the 3rd Force, agreeing peace deals with their pro-House of Representatives opponents, respectively the Warshefana in the west and the Magraha in the south. There was then a growing momentum for reconciliation in the west of the country with other large Misrata brigades joining the process.

In the past week that momentum has speeded up. Almost all the towns west of Tripoli with the exception of Zuwara have now sighed peace deals and agreed that the Libyan National Army should take over security.

Pro-LNA forces are now reported to be in control of a number of checkpoints on the coastal road.

Although the new body’s statement says it rejects all political negotiations or military agreements not approved by the General National Congress (GNC) and that it respects the Supreme Court’s decision supposedly dissolving the House of Representatives (HR) in Tobruk, it is not known exactly what its relationship will be with the GNC or whether it will accept the most recent draft in the UN-brokered Dialogue process.

Badi himself was a member of the GNC but resigned early last year, ironically over its decision to extend its life beyond February 2014.

He is known to be opposed to the Dialogue process, as is his Misrata ally, Abdurrahman Sewehli, a member of both the GNC and the HoR, whom the UN tried in vain to sanction last month on the basis that he was obstructing the peace process.

Declaring Sharia to be the source of all law in Libya in line with the constitutional amendment passed by the rump Congress just over three weeks ago, the statement said that the front rejected “any diktats or commandments from outside imposed on the Libyan people which reduce our sovereignty”, or any outside attempt to force the Libyan government into decisions that did not “meet the aspirations and goals of the revolution”.

Legitimacy in Libya, it said, was in the “custody” of its revolutionaries.

The front furthermore said it would address organised crime and illegal immigration as well as extremism and make the Mediterranean a place of “peace and stability”.

The creation of the new Libya Dawn Mark-2 is also seen as a response to reports that a 6,000-strong force is being planned with the support and input of Misrata and Zintan and which is intended to secure the capital once a government of national unity is approved by both Congress and the HoR.

The Tripoli brigades that are part of the new group could probably put up a major fight against such a force. However, those in it from Misrata are said to be few in number although possibly highly motivated.