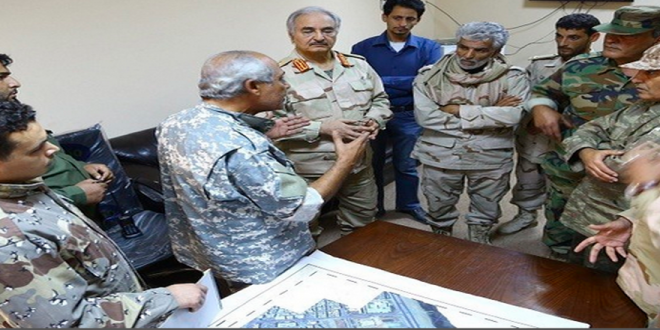 General Khalifa Hafter has told House of Representatives (HoR) President Ageela Salah Gwaider, that the reason he sacked Colonel Faraj Barasi last week as head of the Derna Operations Room was because he was incompetent, was acting independently of General Command, had maed unauthorised statements to the media, and was planning to attack Hafter’s forces once Benghazi was fully liberated.

In a leaked statement to the HoR president, who had appointed both Hafter and Barasi to their respective positions, Hafter said that when Barasi was commanding the Libyan National Army (LNA) forces in Benghazi’s Sabri district, the colonel had claimed that he was been kept short of weapons by General Command purely to divert attention from his own failings as a commander and his lack of progress. In fact, Hafter said, Barasi had sufficient weapons but was hiding them, mainly in the Beida area, for later use against himself once Benghazi was freed.

Beida is the main centre of the influential Barasa tribe.

Hafter added that the latter’s military failings had shown themselves in his inability to protect business and banks while he was commander in Sabri. He claimed that in Benghazi, Barasi had undermined military operations inside the city, with resulting effects on military morale.

He also accused him of being responsible for much of its destruction.

Since then, Hafter alleged, Barasi had had secret meetings with other LNA commanders, once in Tobruk and on several occasions in Benghazi. Barasi, he added, had also visited a Benghazi prison for unauthorised talks with a man being held there.

Hafter did not name the man, nor those LNA commanders Barasi allegedly met.

Three days ago, representatives of Harabi confederation, which includes the Barasa as well as the Dursa, Hasa and Ubaydat tribes, demanded that Barasi be reinstated. They said that they were not opposed to Hafter but that the colonel should be in charge of military operations from Guba to the Egyptian border. The meeting was then followed the day before yesterday by another between the Awagir tribe and Hafter which resulted in a statement saying they had resolved the issue of Barasi but did not say what the outcome was.

In his statement to the HoR President, however, Hafter who has reportedly appointed a Colonel Salem Al-Hassi as head of the Derna Operations Room, said that he respected the Barasi tribe and its leaders but nonetheless had ordered that the colonel stay at home and not take part in any military matters.

He left the final decision n the matter, however, to Gwaider.

For the moment, Barasi remains in de facto command, claiming that as he was appointed by the HoR president in his capacity as Commander-in-Chief, only he can remove him. Barasi’s subordinates take the same view.

For Gwaider, the issue is becoming increasingly uncomfortable, and with the potential to seriously undermine his position. He appointed Barasi as head of the Derna Operations Room after the Barasa tribe had complained about his sacking by Hafter as Benghazi commander. Three days ago

He cannot afford to alienate them now. Likewise, to accept to the colonel’s sacking after having appointed him would be a stark admission that he has no military authority. But he may be in no position to resist the Hafter’s demands.

Meanwhile, Barasi has denied reports that he was injured in fighting in Ras Hilal.