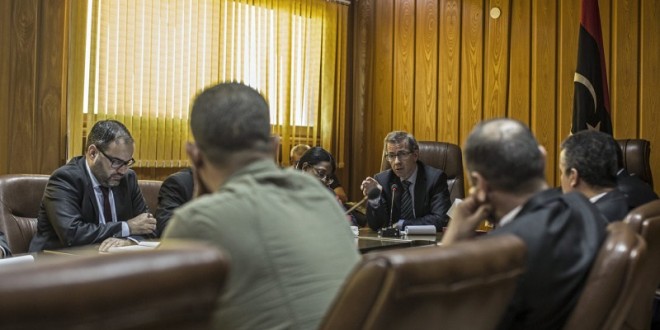 The body language as all parties at the UNSMIL dialogue sat together in formal talks for the first time today suggested a degree of wariness.

This may have been because everyone knew the official photographer was present. In Berlin earlier this month they were all in the same room but there were no substantive negotiations. However, ever since the first dialogue meeting in Ghadames last September, rival delegates have been meeting each other over coffee or meals, as last night for Iftar.

A similar unity was shown today by diplomats shadowing the talks in the Moroccan resort of Skhirat. Eleven ambassadors and special envoys to Libya, including those of Turkey and the UAE for the first time, urged the delegates to reach an agreement quickly. They said they were deeply concerned at the expansion of terrorism in “Libya and outside its borders”.

The Tunisian beach massacre appears to have concentrated minds.

The ambassadors and envoys of the EU, France, Germany, Italy, Morocco, Portugal, Spain, Turkey, UK, US and the UAE said in a joint statement that they considered Draft 4 to be a good compromise. It met the “urgent expectations of Libyan people and secures the unity of Libya. We reiterate that there is no military solution to this crisis and we underline that the economic and humanitarian situation is worsening every day. We call on all Libyan decision-makers to show, in this crucial moment,responsibility, leadership and courage.”

Speculation this evening that a deal could be signed as early as tonight was, however, denied in many quarters.