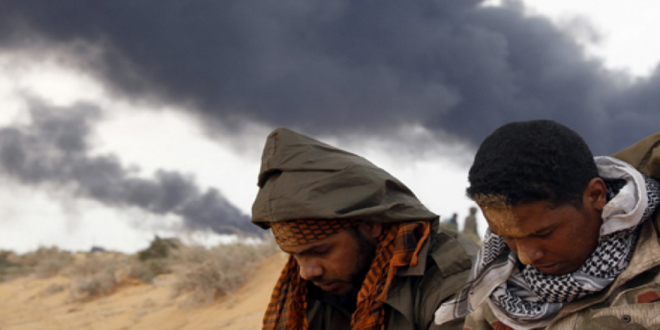 Just 100 kilometres east of the Tunisian border with Libya is the town of Sabratha. It is there, the Tunisian authorities report, that ISIS is operating a training camp whose “graduates” were implicated in both the June beach attack in Sousse and the March attack on the Bardo Museum in Tunis. The attacks targeted tourists and dozens were killed. It’s no wonder that Prime Minister Habib Essid announced on 9 July that Tunisia is going ahead with plans to build a 100 mile-long wall to protect the border.

Another 500 kilometres east of the Ras Jadir border crossing, in the Libyan coastal city of Sirte, ISIS raised its ominous black flagits ominous black flag last week as observers reported a convoy of reinforcements for the group arriving from Sudan. Farther east still, in the ruin that has become Benghazi, fighting escalated between Libya’s national army and a motley group of ISIS offshoots. On Libya’s eastern border, Egyptian officials – facing a series of high profile attacks in the Sinai Peninsula and political assassinations in Cairo – have stepped up border security, as ISIS militants have been crossing over from Libya. How did Libya become such a chaotic mess?

Libya’s agony has been four years in the making, as successive waves of contested governments have failed to put the country back on its feet following the 2011 ouster and lynching of Muammar Gaddafi. The speed of Libya’s descent into chaos has been shocking to foreign investors, diplomats and academics, NGO officials and journalists, as well as its own citizens, including the estimated 2 million living in exile and approximately half-million internally displaced persons. However, even more critical is the degree to which Libya’s disaster has become a malignancy radiating across the region, affecting not only its immediate Mediterranean neighbours – or the ring of unstable nations along the southern border – but also an increasingly shrill Europe.

Last Thursday, the Italian military reported that another 12 people drowned, after it had rescued 500 more refugees adrift in the Mediterranean in unseaworthy vessels. Italy is joined by France, Britain and other EU countries in fearing ISIS-sponsored attacks launched from Libya, but those fears are also fracturing any unified response, especially when it comes to dealing with the massive influx of refugees. Examples include Italian Prime Minister Matteo Renzi’s warnings in June of anti-immigration measures that will “hurt Europe” and the announcement that Hungary’s Viktor Orban plans to build a wall of his own, at the behest of a profoundly xenophobic ideology that equates immigration with terrorism. At the same time, EU member states are bitterly divided over how to share the burden of relocating tens of thousands of migrants from Italy and Greece to other countries.

Even if the “fortress” strategies of both Tunisia and Hungary are based on legitimate security concerns, translating these concerns into effective actions has proven tenuous at best and has exacerbated the many fractures underpinning this politically brittle region. Tunisians reject the idea of a wall both ideologically – as it is seen as regressive and anti-democratic – and pragmatically, as extensive black market trading is done over the porous border with Libya. Europeans, on the other hand, have grown increasingly uncomfortable with Hungary’s loud anti-immigration, illiberal rhetoric. “We have only recently taken down walls in Europe; we should not be putting them up,” commented the EU commissioner on immigration.

Yet, even as nations across Europe and the Middle East are reacting to the twin threat of Islamist violence and the influx of poverty-driven refugees spewing out of Libya, taking piecemeal measures such as building walls and sending out rescue missions at sea is not nearly enough. The locus of the problem remains Libya, and only the employment of a strategy targeting the North African state will reverse the deteriorating security environment of both Europe and the Middle East-North Africa (MENA) region.

Libya’s internal crisis and the ISIS threat in context

The Libya Herald reported from Tunis on 9 July that the UN-brokered Libya Dialogue, coordinated by Special Envoy Bernardino Leon, had reconvened in Morocco with all delegates present apart from the expected holdouts from Libya’s General National Congress, who are seeking amendments.

In his letter to the GNC, Leon affirmed that this effort to create a stable government “is a Libyan-Libyan dialogue, and its members represent the different segments of the Libyan society and a diverse range of opinions.” It remains, Leon said, the only peaceful mechanism to find a solution to the crisis and stop the spread of ISIS.

Those challenges are formidable, and are far messier than the simplistic view that Libya is in thrall to two competing governments, with two armies and two parliaments. Brian McQuinn, co-editor of “The Libyan Revolution and Its Aftermath“, has counted at least 236 different fighting units in Libya’s Misrata Military Coalition alone that emerged following the revolution, and describes them as the most cohesive force in the country. “They are, however, not a monolith,” McQuinn writes, in spite of the bonds forged by revolution, and opposition to the anti-democratic leaders based in Libya’s east.

Indeed, as McQuinn warned earlier this year in the Washington Post, if the talks fail to establish a functional Libyan government and put an end to the violence, ISIS affiliates will become a permanent element of Libya’s political landscape and, as a consequence, Europe’s everyday lived reality. “In a year when the Islamic State can attack Europe across the undefended Mediterranean Sea,” he wrote, “the West’s electorate will ask why more was not done. Unfortunately, it will be too late then.”

“Too late” is not an option for Europe’s citizens, who responded on Friday to new threats of an imminent attack in Tunisia by quitting the country in droves, even as Leon and the Libyan delegates were convening. “Too late” is not an option for the international community, whose members – now including the newly appointed US Ambassador to Libya, Peter Bodde – must decide to act to intervene with a military response or, at the very least, to apply meaningful pressure to implement the road map for Libya.

This is essential because in Tunisia, Hungary and beyond, investing in the false security offered by newly-built walls, or their political and ideological equivalents, won’t prevent this “too late” for Libya either. Only Libyans can, and must, put an end to petty political squabbles and reclaim their country. And they must do it now, before it is genuinely “too late”.