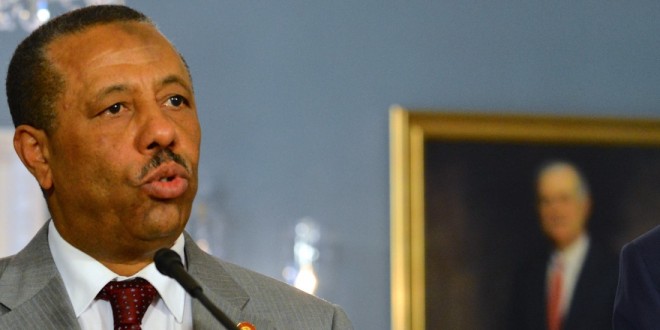 The prime minister of Libya’s internationally recognised government, Abdullah al-Thani, announced his resignation in a surprise move live on television on Tuesday, hours after fraught peace talks between the country’s rival factions restarted.

During the talk show Prime Minister Al-Thani faced a barrage of angry questions from citizens who blamed his government for the lack of basic services such as electricity and poor security in areas it controls.

“If my exit is the solution then I announce it here,” al-Thani said during the talk show, adding that “my resignation will be submitted to the parliament on Sunday”.

However, a spokesperson for the House of Representatives said the prime minister had not resigned, when contacted by the Reuters news agency.

“The prime minister has not resigned officially,” spokesperson Arabi said. “He said during the television interview that he would resign if the street demands it.”

“A resignation needs to be handed in writing to the House of Representatives, which would accept or reject it.”

The prime minister, who escaped an assassination attempt in May when gunmen opened fire on his car after a parliament meeting, was also hit with accusations of corruption against his government in the television interview.

Libya, which plunged into chaos after the fall of Muammar Gaddafi in 2011, currently has two rival parliaments vying for power as well as several militia groups battling for control of the country’s vast resource wealth.

Al-Thani’s elected government has been working out of a small eastern city near the border with Egypt since a militia alliance captured the capital Tripoli last year.

Earlier on Tuesday the two rival factions started a new UN-sponsored round of peace talks in Switzerland’s Geneva aimed at creating a unity government, with representatives of the powerful Tripoli parliament joining the negotiations after boycotting them last month.

United Nations special envoy Bernardino Leon, who is brokering the talks in Geneva, is urging the key camps to reach a political deal in the hope that a unity government could enforce a durable ceasefire.

Libya is gripped by spiralling insecurity with Benghazi, the main city in the country’s east, caught in a daily war between pro- and anti-government militias and forces.

The international community recognises the parliament that sits in the eastern port city of Tobruk, which installed the controversial General Khalifa Haftar as its army chief in March.

A partial peace deal aimed at restoring stability was reached last month, but leaders of the Islamist-backed General National Congress (GNC) parliament that sits in Tripoli boycotted the pact, calling it “unsatisfactory”.

Leon told reporters on Tuesday that all key actors were represented in the new round of talks in Geneva “without exception”.

He laid out an ambitious timetable, calling for a comprehensive deal that installs a new unity government to be concluded before the next UN General Assembly meeting in September, although he warned the process would be complex.

The GNC – which took power after an Islamist militia alliance captured the capital last year – will not sign any deal that safeguards a senior military post for Haftar, according to Mohammed Ali Abdallah Addarrat, who sits in the Tripoli parliament and is the head of the National Front party.

“There will not be an agreement if General Haftar is still expected to lead an army in Libya,” Addarrat said.

“Those who were involved in escalating the political and military crisis in Libya cannot be the ones who lead the solution. This is a given.”

The 72-year-old Haftar served as a general under Gaddafi before relocating to the United States, where he worked at times with the CIA, according to reports in US media.

He returned to Libya last year and took charge of the army, vowing to crush the Islamist militias while urging the West to support his forces.

Italy, which has seen tens of thousands of migrants and refugees reach its shores this year, most of whom travelled through the chaos in Libya, praised the GNC’s decision to join the talks.

With the GNC involved, “the political process can move forward,” Foreign Minister Paolo Gentiloni said in a statement.

But experts say that fighting on the ground could continue even if the GNC and Tobruk parliament ultimately form a unity government.

“There may be a disconnect between the negotiators and those fighting,” said Frederic Wehrey, a North Africa specialist at the Carnegie Endowment for International Peace.

Leon said a separate dialogue was ongoing with military and militia leaders but that progress on that track was slower.

“There has to be more convergence,” he said, stressing that without full buy-in from those fighting on the ground, a political deal is unlikely to hold up.

Addarrat conceded that militias linked to Al-Qaeda or the Islamic State group will almost certainly reject any unity government, but said that Libya’s best hope to combat extremism is through a single, recognised central authority.

“There are always extremists and others who don’t want a political solution,” he said.

“The solution is a national unity government that can confront them.”