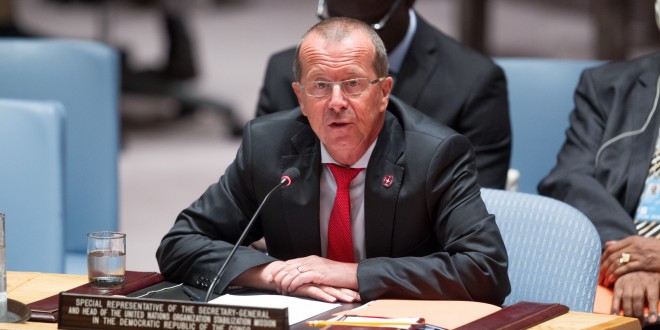 What the new UN envoy to Libya should do first

Martin Kobler has taken on the role of the UN secretary-general’s special representative in Libya, and he faces a daunting task: overcoming his predecessor’s betrayal of the country’s trust.

Libya has been divided into two rival governments for more than a year. In August 2014, the armed alliance Libya Dawn was able to take over Tripoli, forcing out the official, internationally recognized government, which relocated to Tobruk. Kobler’s predecessor, Bernardino Leon, was tasked with uniting both sides to form one government.

The factions rejected Leon’s proposal in October. Kobler’s priority since taking over Nov. 17 has been to get the political process moving again. He first must regain the trust of Tobruk and Tripoli. Both relationships were badly damaged by Leon, who left Kobler a somewhat tainted process. Leon departed in controversy after the British newspaper The Guardian revealed he had been secretly negotiating a high-paying job to be director of the United Arab Emirates’ (UAE) diplomatic academy. The UAE recognizes the government in Tobruk.

In his exchanges with UAE Foreign Affairs Minister Abdullah Bin Zayed, Leon discussed many details about his proposed political settlement. In an email sent Dec. 31, 2014, Leon outlined his strategy and action plan, jeopardizing his supposed impartiality.

Kobler is a veteran German diplomat with years of experience, including as UN envoy to Afghanistan, Democratic Republic of Congo and Iraq between 2010 and 2013. He is accustomed to controversy and criticism, particularly in Iraq. His handling of the situation there of Iranian dissidents in 2011 was harshly criticized, even by his own UN colleagues at the time, including Tahar Boumedra. Boumedra, a UN human rights officer in Iraq, resigned in protest after accusing Kobler of promoting the Iraqi prime minister’s agenda and sacrificing his integrity as an independent UN envoy.

Kobler should also be open to discussing some names Leon has already proposed to head a new government in Libya. Both parties had rejected previous candidates from Tripoli such as Abdel Rahman Suihaili and others who have been accused of serious violence and of having direct links to militias suspected of committing bloody crimes, particularly the Nov. 15, 2013, killing of dozens of peaceful protesters in Tripoli. On the other hand, the GNC also accuses Gen. Khalifa Hifter, commander of the Tobruk-backed Libyan army, of committing crimes in Benghazi and has asked for his removal. Indeed, if Hifter’s exit would bring about an agreement between the GNC and the House of Representatives and a final settlement, he should leave for the benefit of the country.

Also, Kobler needs to come up with a balanced formula for power-sharing that includes more representatives from eastern and southern Libya. As long as any part of the country feels it is left behind, a settlement will be hard to come by.

Transparency remains key to success at this stage. In previous rounds of talks, both sides were rarely in the same room. Leon generally just told everyone what they wanted to hear, according to both the GNC and the House of Representatives negotiating teams in Skhirat, Morocco. Kobler should insist on both sides meeting and exchanging their views in writing.

Kobler must have the backing of the UN Security Council, particularly in reinforcing its resolutions concerning Libya adopted since 2011. Resolution 1970 imposed an arms embargo on Libya and Resolution 2174 threatens punitive action against individuals and entities accused of committing crimes against civilians. The Security Council is supposed to publish a list of anyone in Libya suspected of violence resulting in civilian deaths, infrastructure destruction and displacement of thousands of Libyans. Yet nothing has been made public in the 15 months since the resolution passed. The council has on many occasions expressed its unreserved support for the UN-led political process in Libya, but all the talk has failed to convince the parties that it means business.

The House of Representatives has accused countries such as Turkey, the UAE and Qatar of supplying arms to different groups in Libya, including the Islamists controlling Tripoli. These countries should understand that the United Nations could take action against them.

If the United Nations wants to help its new envoy to Libya, it should first clear the controversy and distance itself from his predecessor’s actions. Otherwise, the United Nations is likely to lose any trust the Libyan public might have left. The United Nations must take serious measures to disclose the entire scale of what Leon revealed to third parties, including the UAE foreign minister, and hold Leon accountable so as not to waste a peace process that was so delicately established. Kobler certainly does not want to restart the whole process and prefers that both the GNC and House of Representatives sign the agreement they have already negotiated, a view he expressed Nov. 23 during his first visit to Libya.