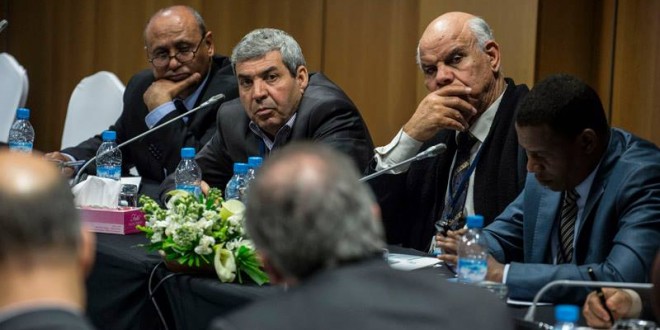 Emhemed Shouaib, the Deputy President of the House of Representatives (HoR)

In a rare press conference, Emhemed Shouaib, the Deputy President of the House of Representatives (HoR), added his voice to those criticising the proposal agreed in Tunis between a group of members from both the HoR and the General National Congress (GNC) to appoint a unity government and adopt an amended version of the 1963 constitution. While the HoR welcomed any peace moves, he said the Tunis agreement went against everything that had been achieved in the more than a year of the UN-brokered Libya Dialogue negotiations.

Speaking in the Tunisian capital today, he told the Libya Herald it was a deliberate attempt by “spoilers” to derail the Government of National Accord (GNA) and the Dialogue deal.

Under Saturday’s rival proposal, a committee of 10 members – five from the GNC and five from the HoR – would name a prime minister and two deputy prime ministers within 20 days of first meeting. They would also amend the 1963 constitution which would then be brought back into use.

This too was condemned by Shouaib as itself unconstitutional. There was a Constitutional Drafting Assembly, he said. It had been democratically elected to draw up a new constitution. It was not for a committee from the HoR and the GNC to take over the job.

Indicating that the man leading the HoR team to the Tunis talks, Benghazi HoR member Ibrahim Amaish, had had some HoR authority to talk to the GNC team, Shouaib said that he had gone far further than he was supposed to.

Many members of the HoR have insisted that Amaish was not authorised to negotiate with the GNC. He, however, says he had approval from the HoR presidency, a statement which has been confirmed to this newspaper by an HoR official.

At today’s, press conference, Shouaib, who has headed the HoR team to the Libya Dialogue negotiations since they started, also indicated that the names of the other three members of the proposed Presidency Council – two more deputy prime ministers and a senior minister – would be named in the next few days, possibly as early as Thursday. That is when members of the Dialogue are due to meet with UN Special Envoy Martin Kobler in Tunis to finesse outstanding details of the deal ahead of Sunday’s international conference on Libya in Rome.

As to the formal authorisation of the GNA, it could not be delayed any longer, he said. It would be done at the latest within ten days.

Asked whether it would be able to go to Tripoli, he said that of that were not possible it would have to be based in another Libyan town or city. It would certainly not be based outside the country, he insisted.