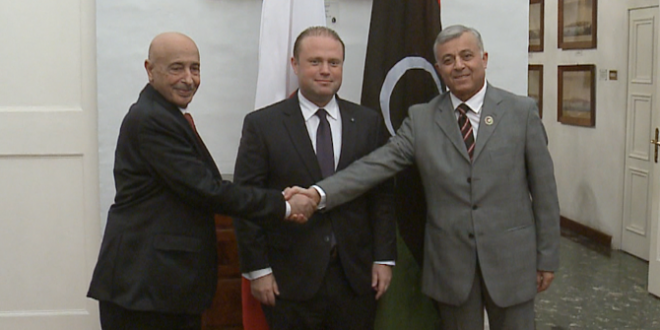 The president of the parliament and his opposite number in the Libya Dawn’s GNC have called for the postponement of the signature of the deal that is supposed to usher in the Government of National Accord.

The plea was made at a joint conference in Malta between House of Representatives’ president Ageela Saleh Gwaider and the president of Libya Dawn’s GNC, Nuri Abu Sahmain.

Saleh said UNSMIL should hold off on the planned signing in the Moroccan resort of Skirhat, where most of the hard bargaining in the political dialogue has taken place. He said that no decision should be made on the composition of the new Government of National Accord , of which Faiez Serraj is the prime minister-designate, until there was a “Libya consensus over the candidates”. He added that no one at Skirhat tomorrow had been authorised to sign either by the HoR or the GNC.

The two men finally got to meet three days after their planned Malta encounter, to which Saleh did not show up.

Hosted by Maltese prime minister Joseph Muscat, the two men shook hands for the cameras before settling down to face-to face talks, albeit on either side of a rather wide table. It is unclear if they were joined by any aides during the discussion, the full details of which have not yet been revealed.

It was generally assumed on Saturday when Saleh failed to make the Malta meeting which Abu Sahmain had trumpeted, that the HoR president had come under intense pressure from members of parliament not to go. It has been suggested that Saleh had expected the talks to be unannounced. He therefore hesitated when Abu Sahmain went public.

Both men are hold-outs against the Political Accord and the proposed Government of National Accord, neither bringing their respective chambers to a vote. Saleh’s position is said to have been informed by the fear that the HoR would split along unionist and federalist lines and deliver no clear decision. The GNC meanwhile has been held off from voting while Abu Sahmain has launched a series of demands, the latest of which is a statement from UN Secretary General about the latter’s former special envoy to Libya, Bernardino Envoy.

The joint press conference in Valletta was given ahead of the announcement that the scheduled Skirhat Government of National Accord signing has been put back 24 hours.