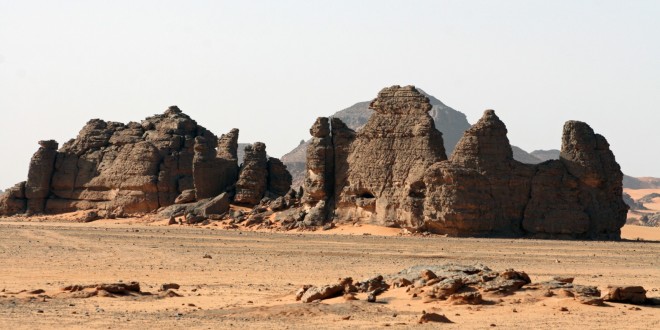 Walk among the geology

There is a small town on Libya’s south-west border with Algeria that has traditionally occupied a key point on the migrant route to Europe.

“Ghat is the Gate of Africa for illegal immigration,” local council head of Libya’s south-westernmost border town, Gomani Mohamed Salah, told Middle East Eye with a note of pride. “They come from sub-Saharan Africa, and gather in Ghat to start the journey to the Libyan coast, and then to Italy.”

But this is now a frontier that few want to cross. Border guard Farouk described how the former numbers of around 100 sub-Saharan migrants making the illegal border-crossing each day had dwindled to around 20 per week.

“They used to come day and night in trucks but not anymore,” he said. “We now have severe fuel shortages in Ghat so the trucks can’t afford to make these journeys and the road to Libya’s coast is very dangerous, even for smugglers.”

Ghat has been virtually cut off from the rest of Libya by a conflict in the desert town of Ubari, 350 kilometres to the north-east, that has seen the only road to the town blockaded for over a year. Goods and fuel supplies can only reach Ghat via a several hundred kilometre diversion through the desert before re-joining the Saharan highway, where checkpoints stand empty and the threat of ambush is high.

Farouk estimates that 95 percent of the migrant traffic is now via Libya’s porous central southern borders, explaining: “There isn’t the market here anymore, so the focus is on other crossing points.”

Small numbers of migrants still make the three-day journey from the Algerian town of Djanet to Ghat on foot, walking 82 kilometres of challenging desert and mountainous terrain.

“In the summer, by the time they reach here, most of the migrants – including women and children – are almost dying because they have been walking for three days. We give them water and a little food, out of humanity, and let them pass,” Farouk said. “What would we do with them, if we arrested them? We have nowhere to keep them.”

Ghat was forced to close its migrant detention centre when it could no longer afford to pay for food for detainees, meaning migrants crossing illegally in the south-western corner of Libya have not been arrested in many months.

Salah said the council had long-awaited a response after writing to EU Commissioner Federica Mogherini to explain the town’s problem with illegal immigrants, but even he admitted Ghat was just a passing point for most.

“Migrants don’t want to stay here because they consider it part of Africa,” he said. “But those who have run out of money stay for a while to work and make enough to pay for the journey north, to the coast.”

Former border security commander Mohamed Ahmed said the fall in numbers actually posed a problem for the local economy because the town needed migrant labourers to work on outlying farms.

But Ghat, like much of Libya, is no longer the lucrative working opportunity it once was. Mending tyres in a village on the outskirts of Ghat, 26-year-old Joseph said he was planning to return to his family in Ghana. “Libya has become too hard and I can’t make enough money here,” he said. “Maybe I’ll try another country in Africa because, although it would be nice to go to Europe, I would never take the boat.”

Working in the village for three years, he has made the illegal border crossing several times and described it as straightforward. “The Algerian security is very, very strong but as long as we stick to the rule of carrying nothing forbidden – no weapons or drugs – we don’t have any problems.”

Returning to his family last year with a bag full of goods not available in his hometown, Joseph said his luggage was thoroughly searched by the Algerian border guards but nothing was seized and he was allowed to continue his week-long journey home.

The changing face of smuggling

Algerian and Libyan security forces turn a similar blind eye to the smuggling of food. At sleepy control posts 30-50 kilometre apart along Libya’s south-western border area, guards make tea and keep an eye on the expanse of desert between the two countries. Most still turn up for work although they have not been paid in six months. They observe small-scale smuggling operations with camels by fellow members of the Saharan Tuareg tribe without intervening, and watch nomadic families who have dual citizenship move around the border region.

A few kilometres further into the hinterland, at one of the many points where migrants and smugglers enter Libyan territory, Tuareg lookouts could be seen standing on improbably high rocks, waiting for two heavily-laden camels which eventually descended through the mountain pass.

“They could be carrying alcohol, but it’s probably powdered milk or French flour,” said border guard Farouk. “These goods used to be smuggled out of Libya. But now we are the ones in need, because there are severe food shortages in Ghat.”

At the border crossing, officially inactive since the Algerian authorities closed its borders with Libya in mid-2014, three guards lounged on mattresses. This is where larger-scale smuggling now operates, between Tuareg relatives.

“The Algerian guys bring the food to the border and hand it over to their relatives on the other side of the gate. All are Tuareg, including the border guards,” Mohamed explained.

It is also where three batches of humanitarian aid were delivered this year by the Algerian authorities, in the wake of what local council head Salah described as a total neglect by both Libya’s rival governments in response to the ongoing crisis in Ghat that has left shortages in particular of food and medicine.

After being waved through the crossing, Mohamed sped across the scrubland between the borders, showing off his desert driving skills in a borrowed Toyota, fuelled from a roadside seller hawking petrol from battered barrels for five times the usual price in one of Ghat’s outlying villages.

“The Algerian authorities sometimes make expeditions here but when they find smugglers or migrants, as long as they are not related to the army and they are not carrying any weapons, they do not arrest them,” he said.

Media portrayals of a flow of weapons being smuggled from Libya into Algeria were alarmist and unrealistic, he claimed. “We are here at the borders and we have seen nothing. We have weapons and ammunition, of course, but we don’t waste them or trade them. We keep them for any future point when we may need them,” he said.

Driving back into Libya towards the mountainous landscape that frames Ghat, he said the war in Ubari had resulted in a complete reversal of smuggling activities in the border region. “Algeria used to take from Libya but, because of the conflict, it is the other way around now, we have to take from our neighbours.”