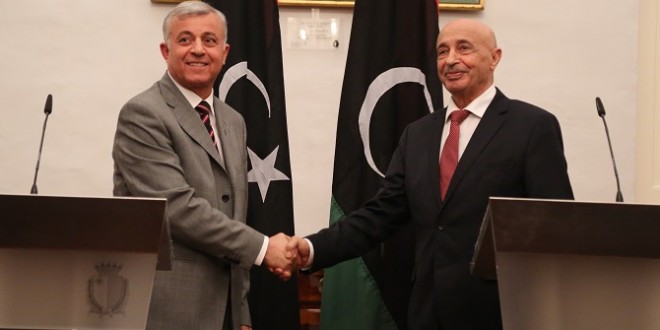 As Libyan lawmakers gather in Morocco to sign a UN-sponsored peace agreement aimed at ending the Libyan civil war, opponents of the deal celebrate an unprecedented meeting between the presidents of Libya’s two rival legislatures that took place on Tuesday in the Maltese capital Valletta.

Around 80 HoR members have arrived in the Moroccan town of Skhirat, and 27 GNC members are on their way, as our correspondents reported from there Wednesday evening. The signing of the Libyan political agreement was meant to take place on Wednesday but was delayed to Thursday, purportedly for logistical reasons. “[A] large number of Libyan participants and high-level international participants, including many foreign Ministers, have committed to attend”, UNSMIL, the UN mission to Libya, announced.

UN Special Envoy Martin Kobler reportedly arrived in Morocco Wednesday evening following a trip to eastern Libya where hemet with General Khalifa Haftar in a last-minute attempt to garner more support for the signing of the peace deal.

The impending UN-sponsored peace agreement was almost absent in foreign media coverage on Wednesday as eyes were focused on Tuesday’s meeting between Agila Saleh Gweider, head of the internationally-recognized House of Representatives in Tobruk, and Nuri Abusahmain, head of the rival General National Congress in Tripoli. While crowds in Tripoli celebrated the “breakthrough” in the dialogue, critics said the unexpected meeting was little more than a move to delay or prevent the signing of the “actual” agreement, backed by the UN.

Despite 14 months of negotiations between members of the HoR, the GNC and independents, as well as consultations with a variety of other stakeholders from municipal counselors to political party leaders, it is unclear how the “Skhirat Agreement” will be received once signed. Talks stalled in October, when former UN Special Envoy Bernardino Leon presented a “final” draft of the agreement and proposed a lineup for the national unity government, and only resumed last week when Martin Kobler, Leon’s successor, officially met with the dialogue teams for the first time in Tunis.

Neither of the two rival legislatures has held a formal vote on the October proposal because there is strong internal opposition on both sides. Facing increasing international pressure to sign a peace deal, the houses and even their dialogue teams have over the past weeks split into factions for and against the deal.

As a result of these splits, the HoR and GNC negotiators in the UN-led talks have been accused of acting without the approval of their respective houses. The GNC leadership in fact disowned Saleh al-Makhzum, who heads the GNC delegation currently in Skhirat.

They are challenged by a group of lawmakers who in late-November launched a rival peace process – referred to as “Libyan-Libyan Dialogue”, capitalizing on public frustration with the dragged-out negotiations and rallying individuals and groups dissatisfied with the October proposal. The group, which consists of HoR and GNC members, signed a so-called Declaration of Principles on December 5 in Tunis, preparing the ground for Tuesday’s tête-à-tête between Abusahmain and Agila Saleh in Valletta.

The two heads of parliament unanimously rejected the UN-sponsored agreement and announced steps to create their own unity government. “We came here to overcome the crisis that the Libyan people is facing and to announce to the world we are able to solve our problems between ourselves. We would like to thank the international community for their help but we also declare our opposition to any foreign interference against the will of the Libyan people”, Agila Saleh said at a press conferencefollowing the Valletta meeting. “We agreed that we want to form a government of national accord but we do not want it to be imposed from abroad”, he added.

Seeking to reassure the international community, Nuri Abusahmain said that “everybody” agreed on the need to fight terrorism and extremism, as well as illegal migration, adding that he was “honored” to work with the United Nations. The aim of the new dialogue, he said, was to combine the “positive aspects” of both dialogue initiatives. “Rushing to announce a National Unity Government without ensuring that it represents the will of Libyans might cause problems in the future”, he warned, and called on the international community to support the so-called Libyan-Libyan Dialogue.

Abusahmain explained that committees would be formed within days to work on a peace agreement, adding that this would be “under the umbrella of UNSMIL”.

There is however no sign that the UN plans to change its approach and support the alternative dialogue track. On the contrary, statements made at an international conference on Libya that took place on Sunday in Rome suggest that the international community will endorse the Libyan political agreement with or without the formal approval of the two parliaments and their respective presidents. In his statement on Wednesday, Martin Kobler merely said he had “taken note” of the Valetta meeting.

All indicates that the UN Special Envoy is trying to bring as many supporters as possible on board to press ahead with the signing of the agreement on Thursday, before the laboriously formed pro-dialogue coalition crumbles under the pressure of its opponents.

Those backing the UN-led dialogue hope that more Libyan stakeholders will join in once the deal is signed and endorsed by the international community. Kobler reiterated on Sunday that the “doors [will remain] open to those who still oppose the agreement”, although he also warned that those who have tried to obstruct the deal would be held accountable.