Home / Normal / The photo that revealed US military presence in Libya 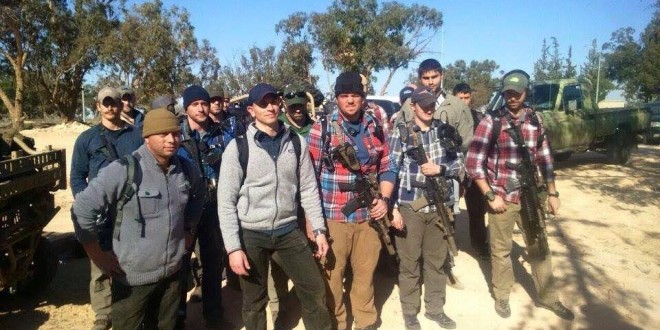 The photo that revealed US military presence in Libya

US special forces have been embarrassingly kicked out of a air base in Libya with their weapons confiscated by Libyan troops.

The commandos were asked to leave by national army troops just moments after arriving in Libya, according to the Libyan Air Forces Facebook page.

Photographs showed a squad of some 20 armed, confused men dressed in casual civilian clothing at al-Watiya airport in northwest Libya.

Libyan Air Forces said the men were US commandos, something which appears to have been confirmed by US defence sources later.

“A US military aircraft with 20 American troops on board landed in al-Watiya airbase, without prior coordination with the force protecting the base,” a post on the page read.

The troops said they were on their way to Italy and had coordinated with military officers about landing in Libya on the way.

Unconvinced, Libyan troops loyal to the Tobruk government forced them to leave and took their military equipment, according to the Facebook post.

US defence officials have admitted to the presence of American crack troops on Libyan soil.

Commandos have been “in and out Libya [for] some time now”, one defence source told NBC News.

Libya has been wracked by civil war and battles between rival militias.

Most fighting has been centered on military units and militias linked to two competing parliaments – the internationally recognised government in Tobruk, and a rival Islamist dominated authority in the capital Tripoli.

Watiya airbase is controlled by Tobruk government forces, despite being just 140 kilometres southwest of the Islamist government in Tripoli.

International powers have been eager to end the war after a power vacuum led to the emergence of an Islamic State group affiliate in Sirte, on the Mediterranean coast.

The group is rapidly expanding its territories towards Libya’s oil fields.

Air strikes have also been launched against leading members of the Islamic State group in Libya.

An agreement signed by Torbuk and Tripoli officials on Thursday could lead to a unity government being formed shortly and peace between the two warring factions.

This could also pave the way for foreign troops entering Libya, to combat the extremist threat emerging just across the water from Europe.

UK Defence Minister Michael Fallon said as many as 1,000 British troops could be sent to Libya as part of a foreign mission.

Since then the country has descended into unrest with battles between rival militias.