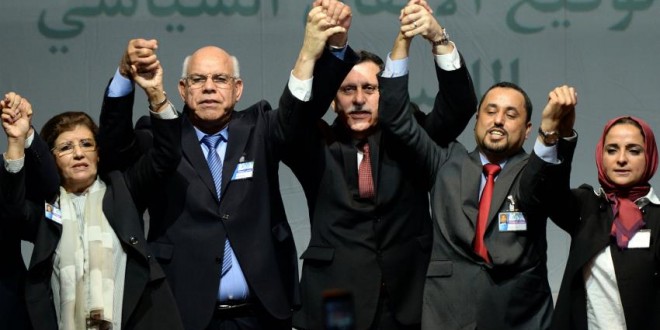 The UN  Security Council on Wednesday approved a resolution supporting a new UN brokered deal to form a unity government in Libya.

The unanimously adopted resolution, drafted by Britain, made clear that Libya’s future unity government should be the sole representative for the North African country, where competing governments have long vied for power.

Libya slid into chaos following the 2011 revolution, which led to the toppling and killing of dictator Moammar Gaddafi.

Since then, it has been torn between an internationally recognised government, based in the Tobruk, and an Islamist-backed government in the capital, Tripoli.

But the agreement, signed in Morocco on Thursday, has attracted criticism from both side.

The agreement aims to create a new national government in Tripoli, end the divide between the rival parliaments, governments and military coalitions, and give the international community a partner for its battle against the IS’s affiliate in Libya and human traffickers.

The agreement also envisages a presidential council tasked to choose the Cabinet, which includes a prime minister, five deputies, and three state ministers. Fayez Serraj, a member of the eastern parliament from Tripoli, will head the council.

“On paper, this is fantastic news,” said analyst Claudia Gazzini of International Crisis Group. “In practice, the uncertain level of support for the agreement in Libya, the fact that the leadership of both existing parliaments oppose it and are busily devising their own peace plan, and the fact that the new government will have little control over key parts of the country have left many sceptical.”

The document was signed by Emhemed Shoaib, the deputy speaker of the internationally recognized Libyan parliament, and Salah al-Makhzoum, the second deputy of the Islamist-backed parliament based in Tripoli, among others. But it has detractors on both sides who seek a separate deal without UN involvement.

“We know well that the document of political accord in its current form is not the perfect thing that everyone wants, but at the same time, this political accord is a stage on the path to rescue Libya from collapsing and to ensure its unity,” al-Makhzoum said.

Shoaib said the deal is meant to say “goodbye to weapons” that Libya is awash in.

Libya also faces a growing threat of the Islamic State group, which have made a base on the country’s Mediterranean coast.

The UN estimates there are between 2,000 and 3,000 jihadist fighters in Libya, and local officials warn of hundreds of Tunisians, Sudanese or Nigerians travelling there for training.