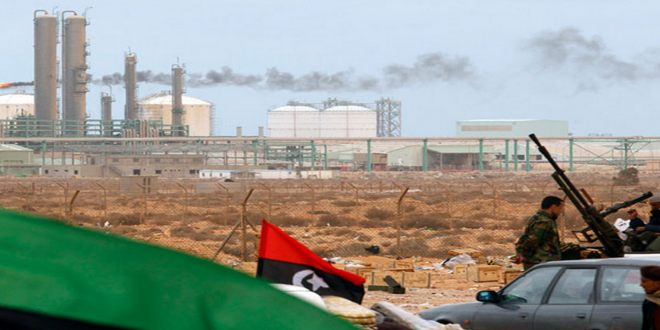 IS attack on oil region continues for second day

Islamic State militants continued their assault on Libya’s largest oil ports for a second day after sweeping control of nearby Bin Jawad, in a coordinated assault on the Oil Crescent as the group searches for new sources of funding.

At least fourteen people, including nine Petroleum Facilities Guards, four IS fighters and a civilian, were killed on Monday and Tuesday in the three-pronged attack on the eastern oil-rich area.

The jihadists started with a suicide car bombing of the gate to Sidra oil terminal, the largest in the country, on Monday morning. Afterwards fighters in dozens of cars stormed the area around Ras Lanuf, another key oil port adjacent to Sidra.

“We were attacked by a convoy of a dozen vehicles belonging to IS,” Colonel Bashir Boudhfira, a senior military commander in the area, told AFP on Monday. “They then launched an attack on the town of Ras Lanuf via the south but did not manage to enter,” he added.

The fighting resumed on Tuesday morning with an IS attack on Sidra and clashes with the PFG are still ongoing.

IS – which first appeared in Libya in October 2014 in the east but has since moved its headquarters to Sirte – threatened to move on Libya’s oil facilities months ago.

Key oil infrastructure, including crude loading berths, storage facilities and a refinery, are at risk of being destroyed. One of Ras Lanuf’s dozen 420,000 barrel oil storage tanks caught fire on Monday and was still burning 24 hours later. Another oil storage tank, at Sidra, went up in flames after being hit by a rocket on Tuesday, PFG spokesman Ali al-Hassi told Libya Channel.

An IS media arm published photos of the Sidra oil storage facility, which is located just a few kilometers south of the port, claiming they were in control of this part of the industrial complex.

The Group also published a statement claiming full control over Bin Jawad, a town just 30km west of the oil terminals which had been infiltrated by IS fighters over the last few months. Local residents reported that the jihadists were amassing in their new stronghold, sparking fears of a sustained battle for the control of the Oil Crescent.

Medics at Ras Lanuf’s hospital told Libya Channel among Monday’s dead were four IS fighters. One of the IS bodies – believed to be the suicide bomber later identified by his nom-de-guerre as “Abu Muadh al-Qaraani” – was completely destroyed. The three other IS fighters – whose photos were published by the group – were named as Abu Hamam al-Ansari, Abu Abdallah al-Ansari and Abderrahman al-Muhajir. All were pictured wearing military-style camouflage and carrying assault rifles.

Since losing their original stronghold of Derna in June last year, the Libyan affiliates of the global terror group have headquartered their operations in the central city of Sirte, commanding a 200km stretch of land east to Nofliya.

Sirte residents reported large convoys of the jihadists moving east weeks ahead of Monday’s surprise coordinated assault on the PFG.

On Monday they pushed 30km further east from Nofliya to take Bin Jawad – the last village before Sidra and Ras Lanuf and a useful foothold for their ongoing assault on the oil crescent.

This followed reports on Sunday that IS had evacuated the village of Harawa, halfway between Sirte and Nofliya. The fact that the Group reappeared further east the next day suggests this was merely a tactical withdrawal – presumably into the desert – aimed at surprising the PFG.

IS’s sudden advance toward the east may be an attempt to exploit instability and tensions between armed groups in Ajdabiya, the nearest main town and so-called “capital” of the oil crescent.

Last week a group of militants in Ajdabiya pledged allegiance to IS in a video they posted on the internet. During the short clip, fighters claiming to be from the Ajdabiya Revolutionaries Shura Council – vowed to obey Abu Bakr Al-Baghdadi.

ARSC – whose membership includes UN-designated and Al-Qaeda aligned terror group Ansar al-Sharia and members of the now defunct Libya Shields – later released a statement denying any involvement in the pledge.

However, it is clear IS is gaining new followers from defecting members of Libya’s rival extremist groups. Many army supporters moreover see the distinction between IS and groups like the ARSC as semantic and say extremists in Ajdabiya and Benghazi welcome IS fighters to boost their capacities.

There have been speculations in social media that one of the four IS suicide bombers on Monday, Abu Abdallah al-Ansari, whose face on the picture released is covered up except for his eyes, could be a 16-year old boy who recently disappeared from Tripoli. Most of the IS fighters captured, killed or seen in IS propaganda films from Libya are believed to be foreigners from other Arab or African countries. But doubtlessly the IS Group is also working to recruit local youth.