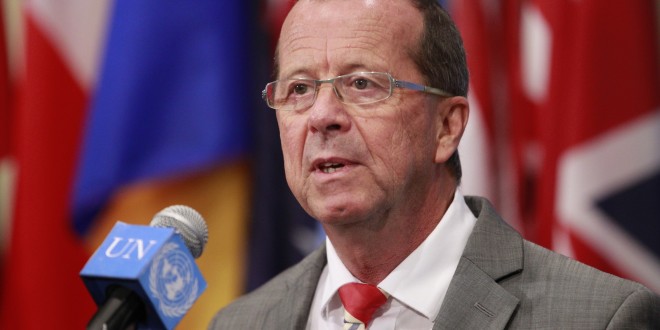 Kobler to continue efforts to bring opponents onboard Skhirat agreement; pursues security as the top issue

Despite the setback on Friday when the General National Congress president Nuri Abu Sahmain and his allies rejected an appeal by UN Special Envoy Martin Kobler to back the Libyan Political Agreement (LPA) and the national unity government, Kobler says he will continue trying to convince them and others opposed to the deal to change their minds.

“Expectations were very low anyhow,” he says about his visit to Tripoli. “But I will go on lobbying for support for the Libyan political agreement,” he pledged in an interview with the Libya Herald.

He stresses that in his various meetings with Libyans – Friday’s was his second visit to Tripoli – he listened to all the requests, all the concerns “from the east, the west, the south, of the independents, of Benghazi, of everybody”. And, he adds, “partially, they are justified”.

However, given the various crises that are overwhelming the country, his response is curt: “I don’t see any alternative.”

It is a phase he used several times while talking about the situation in Libya.

“There is anarchy, there is chaos,” he states forcefully. He talks of “the dire economic situation and the dire social situation”, while security and political vacuums resulted in “Daesh extending rapidly to the east, to the west from Sirte but also, as a matter of concern, to the south”.

And in Tripoli, he points out, the supposed authorities are not in control at all. “I’ve seen it. If you drive through the town you are handed over from on militia to another.”

He was speaking in the same hotel and at the same time as the nine-member presidency council led by prime minister-designate Faiez Serraj was meeting to agree membership of the new government and its agenda. It has until 16 January to make its decisions. The government then has to be approved by the House of Representatives within 10 days, by 26 January.

Once that happens, Kobler says, the UN and the entire international community expect the two administrations in Tripoli and Beida “to hand over their files, their ministries and their money”. It will be the sole legitimate authority of Libya, he stresses. “If you read [UN Security Council resolution No.] 2259, there is no room for interpretation. I expect the other governments to hand over their business to them. And the Central Bank, the national oil corporation and investment authority will be under the authority of the government of national unity.”

He does not say what would happen if they refuse. “That’s an ‘if’ question. I do not dwell on “if” questions.” He adds: “Everybody knows that there are sticks. I want to broaden the basis and bring them [the opponents] on board and to work with incentives at this stage. My way now is to broaden the consensus and to work with carrots.”

He appears already to have succeeded with the president of the House of Representatives (HoR) Ageela Saleh who, following talks with Kobler last week in Beida, has swung behind the LPA and dropped his support for the rival “Libya-Libya” dialogue championed by Abu Sahmain.

Still undeveloped, it is widely seen as little more than an attempt to destabilise the UN-led process.

As to whether the HoR president will stick with his new position, Kobler believes he will. “When he tells me ‘I accept the Libyan Political Agreement including the list of names’, I take his word.”

He is also confident of the international community’s backing for the new unity government once set up and that no country will continue any dealings whatsoever with the Tripoli and Beida administrations should they refuse to hand over and resign at once.

“I am very impressed by the commitment of the international community. This includes the neighbouring states, the regional states but also countries like Russia and China.” The Rome Declaration of 13 December, agreed by all five UN Security Council veto members as well as eight Arab states and Turkey, plus the UN, Arab League, African Union and EU is also considered by Kobler as decisive in assuring that the Serraj administration alone will be accepted as Libya’s government.

His objective now is to ensure, once approved, it can get into Tripoli as quickly and as peacefully as possible – and remain there. “The capital is Tripoli, the seat of institutions. The government of national unity must be in Tripoli at the end of the day.”

Being realistic, it means talking to the militias “because in the end it is the weapons which prevent people from coming in”. But he does not want to have to have a fight to get into Tripoli. “My main endeavour is to have a peaceful process, not a violent process.” Skhirat should lead to peace, not to military confrontation, he says. That means there has to be “an inclusive security dialogue” with all those wielding real power in Tripoli – the militias – and not just with those in Tripoli but in other places as well.

“With the signing in Skhirat, we left the period of conference rooms. We have to go to Tripoli and implement the agreement. It is a long process. It will not be finished within a very short time. But the way of the Skhirat agreement – the demobilisation, the disarmament of the militias, the containment of heavy weapons – that’s all there. But one has to negotiate it.

“We have now, with the assistance of General Paolo Serra [Kobler’s military adviser], begun to discuss with the militias how to get the government of national unity back [into Tripoli]. Plans are there.”

The aim is to get the militias “to tolerate that there is a government of national unity that goes back”, not protect it, “because a government cannot be protected by militias”. That has to be done by the armed forces and the police.

The nucleus is there for both, but they have to be developed, he says.

“They need weapons. They need to be legitimised.”

As to talking to the armed groups, he does not mean all of them. “I would not include everybody. Many of what we call militias or armed groups are just criminals. I would separate the criminal gangs from those which can be called armed groups.

Security is not just about getting the government into Tripoli. There is also the so-called Islamic State and the need to end arms embargo to enable the Libyan armed forces to fight and destroy it.

But “how do they fight them?” he asked rhetorically.

Kobler insists that not only is the LPA is the only workable plan on the table, he believes that the vast majority of Libyans want it to go ahead. “I am convinced that 95 percent of the Libyan population are just tired and want to have progress,” he says. He is, he insists, simply following the voice of “those Libyans who wanted the agreement to be signed rapidly and then to be implemented”.

He also sees a “wide gap” between what Libya’s political leaders and ordinary people think and want. He tells how, during last Friday’s visit to Tripoli, he suddenly asked the driver of his car to stop, jumped out and started to talk to people on the street and in shops. He wanted to hear from ordinary people what they wanted, rather than what the politicians said they wanted. “I asked people standing around ‘What is your main concern?’.” They complained about rising prices, he said, but they made it clear that was not their prime concern.

“They said security. They said: ‘We’re behind a government that gives us security, not those types of people who just terrorise the population’” – referring to the many armed groups who are a law unto themselves in Tripoli,

This, Kobler noted, was not the content of discussion in the GNC. “This was very telling. There were the big political speeches about the colonial past which I acknowledge has to be taken into regard and which determines the future. But I did not hear one visionary idea of those who I spoke to in the political sphere who are in the GNC ­– not one visionary idea for the future. Not one idea how things should be for their children and grandchildren. It was always looking back, much more than looking forwards. I do not belittle the importance of the past. But we are living in the 21st century.”

Kobler talks about three pillars to building a new Libya: peace, security and prosperity. In regard to the latter, he views economic reform and liberalisation as essential keys to ensuring the first two.

“The economy, private economy, is at the basis of the problem. It is cross-fertilising with security in a negative sense,” he says, referring to the fact that, faced with a mountain of red tape and unable to secure financial support to set up their own businesses, young men stick with their military groups or, in some cases, turn to crime.

One idea he proposes is a private sector investment conference.

“I was in Turkey, where this point was made, and in Egypt, where many of the investors are. It is absolutely necessary to create framework conditions – security-wise but also legal – to facilitate and not to block private companies. No red tape. This is absolutely necessary. I strongly encourage very soon a private sector investment conference. Despite the fact that time is not yet mature security-wise.”

Another suggestion relates to the performance of sovereign institutions, that they work in conjunction with international bodies “so that the resources of the country are not depleted, that the fight against corruption is really taken seriously . . . so that the money does not just disappear somewhere”.

Reacting to opponents’ accusations of “a UN-imposed government”, Kobler is insistent that the process is Libyan. “This is very important – to have the Libyans taking the lead, not the international community, not the UN, not member states. It must be a Libyan-led dialogue.

Likewise, he points out, it is for the Libya presidency council to propose the government, for the HoR to accept or reject it, for Libyans to decide the changes Libya needs and for Libyans to fight Daesh.

There is considerable international sympathy for Libya, Kobler stresses.

“This is not foreign interference. This is a foreign complement of a process that must be a Libyan process. It is not pressure. It’s guided by concern about human trafficking, about Daesh, by a deep sense of sympathy that the Libyan people deserve better. Those who have responsibility for the Libyans – the politicians and including now the presidency council and the future government of national unity – they really should take care of the problems like security, like the fight against Daesh, like reducing criminality everywhere, and creating economic prosperity and conditions for security so that the oil production can go up again.

“Not everything can be solved overnight. There has to be patience.

“However, I strongly urge those who do not want to join this train of security and prosperity to do so.”

International Relations and CooperationPolitical Transition
All
2016-01-05
activate
Previous Eastern deputy PMs in presidency council rows over appointments
Next A Constitution for Libya: A Futile Debate?