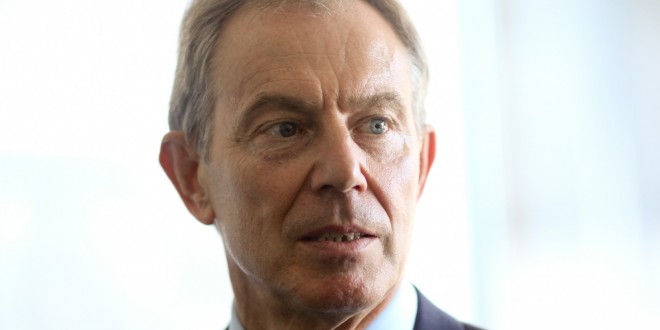 Blair urged the Libyan dictator to stop the violence, start a process of change, stand aside, resolve the situation peacefully and keep communications open between them.

Kadhafi insisted Libya was under attack from sleeper cells from the Al-Qaeda terror network who wanted to take north Africa and attack Europe — and if Western forces intervened, Libya would end up “like Iraq”.

“If you have a safe place to go you should go there because this will not end peacefully,” Blair warned.

The transcripts cast light on Kadhafi’s thinking as the uprising began to escalate.

They were published by the British parliament’s Foreign Affairs Committee, which is examining the Western intervention in Libya’s civil war and Britain’s options now concerning the troubled country.

Committee chair Crispin Blunt said they would consider “whether Kadhafi’s prophetic warning of the rise of extremist militant groups… was wrongly ignored” due to his “otherwise delusional” world view.

Evidence suggests “Western policymakers were rather less perceptive than Kadhafi about the risks of intervention,” he said.

The committee quizzed Blair in December on his relationship with Kadhafi, after which the ex-premier, who was in office between 1997 and 2007, provided the phone transcripts released Thursday.

The uprising that overthrew Kadhafi’s regime began in mid-February 2011.

The two calls from Blair were made on February 25, 2011, the second after Blair reported back to US and European Union figures.

Kadhafi fled Tripoli that August and was killed on October 25.

Libya has since plunged into lawlessness, with the country splitting into two warring factions.

Though out of office, Blair had influence with Kadhafi as his 2004 so-called “deal in the desert” brought Libya in from the cold as Tripoli scrapped its chemical weapons.

Kadhafi claimed Al-Qaeda cells had been attacking police stations, saying: “They want to control the Mediterranean and then they will attack Europe.”

Blair said: “The way to deal with this is the leader says and makes clear he wants a peaceful outcome.

“The use of airplanes to attack cities and the use of force against civilians — this has to stop.”

In the second call, Kadhafi said he was preparing to “arm the people” for a battle against “colonisation”.

“If you want to reap Libya we are ready to fight, it will be like Iraq,” he said.

Blair urged Kadhafi to take the initiative and lead a peaceful transition process.

“I repeat the statement that people have said to me, if there is a way that he (Kadhafi) can leave he should do so now,” Blair said.

“If we don’t find a way out in the next few hours I don’t know what will happen.

“This is the last chance to resolve this peacefully.”

The conversation ends with Kadhafi saying “just leave us alone” and Blair urging him to “keep the lines open”.