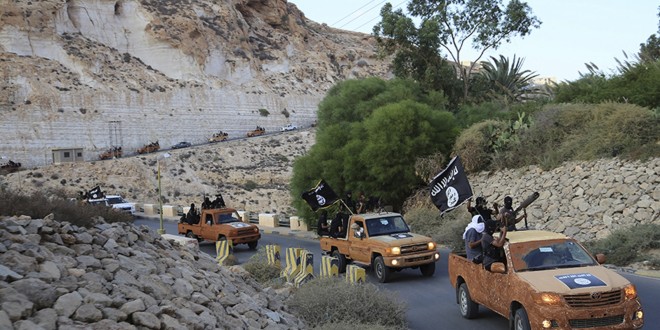 The air raid reportedly hit an IS convoy between the group’s strongholds of Sirte and Bin Jawad, around 150km to the east, according to local witnesses.

The country’s official air force, which answers to the internationally-recognised parliament anchored in the east, said they were not behind the sorties.

There was speculation it could have been ordered by West Libya’s Chief of Staff Jadallah al-Obeidi, who is loyal to the country’s rival administration Libya Dawn, that controls Tripoli. Last week Al-Obeidi’s planes carried out strikes in the nearby Oil Crescent in coordination with forces in the eastern city of Ajdabiya.

Other reports circulating on social media pointed to French planes but none of the accounts could be independently verified.

It came after Algerian newspaper al-Khabar on Saturday reported that western countries were preparing for a “large-scale military intervention” against IS in Libya.

Quoting an “informed source” the North African daily claimed that France and the US had both reached out to the Algerian government to arrange security cooperation.

Several foreign airstrikes have been carried out in Libya recently,  some mystery sorties that were never claimed and were not coordinated with the Libyan authorities.

The US has targeted militants in Libya several times,  most recently in November when it claimed to have killed IS chief , Wissam Najm Abd Zayd al Zubaydi aka Abu Nabil al-Anbari, an Iraqi national and longtime al Qaeda operative. Four months before that they hit a gathering of Al-Qaeda militants in Ajdabiya, in an attempt to neutralize infamous AQ leader Mokhtar BelMokhtar.

Egypt, meanwhile, struck IS positions in the east of the country in February last year after 30 of its Christian citizens were beheaded in a gory half-hour IS propaganda video.

Emirati warplanes are also thought to have hit Libya Dawn positions in August 2014 – but it was never proved.

Several other airstrikes targeting Islamist militants in the east and west of the country have never been claimed and remain a mystery.

Also on Sunday, three boats tried to attack the oil port of Zueitina, which before the 2011 revolt that toppled Muammar Gaddafi was Libya’s second largest oil port in terms of export volume.

According to ذ spokesperson Ali al-Hassi it was a suspected IS attack but the guards were able to repel the militants before they reached the port,  hitting one of the vessels and setting it on fire.

Zueitina, which lies just next to Ajdabiya, was last closed in November but has been offline for much of the past 18 months.

It follows a major assault launched by IS on the nearby oil terminals of Sidra and Ras Lanuf – located between Zueitina and IS’s stronghold of Sirte, next to Bin Jawad.