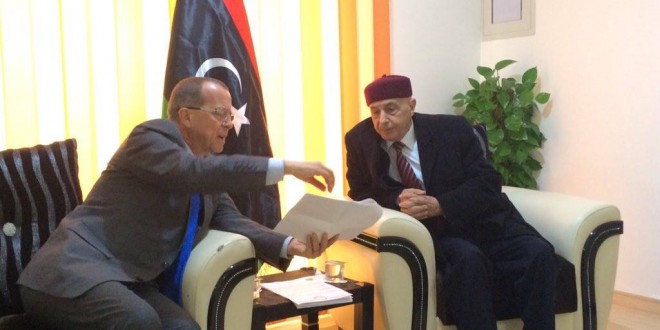 UN Special Envoy Martin Kobler held talks with both the President of the House of Representatives (HoR), Ageela Salah, and its boycotting members in a flying visit to the east Libyan town of Shahat, but in different meetings.

Kobler’s aim in both sets of talks was to ensure that the HoR votes in favour of the Libyan Political Agreement (LPA) and the national unity government within ten days of receiving names of ministers from the Presidency Council.

It was supposed to have chosen them by midnight last night, but failed to do so and issued a statement saying that it was giving itself another 48 hours to come up with a final decision.

In talks lasting more than an hour and a half with Kobler, Salah noted that to amend the Constitutional Declaration in order to integrate the LPA along with the Presidency Council and the new government into Libyan law would require a vote in favour by two thirds of the HoR. This, he reportedly pointed out would require the participation of the boycotting members.

Their presence in the separate talks in Shihat was something of a major development. Some, such as former deputy prime minister Mustafa Abushagur, who is a member for Suq Al-Juma, had not been to the east or had anything to do with HoR’s proceedings since attending its initial meeting in Tobruk in August 2014.

In both sets of talks,  Kobler also spoke about the growing presence of the so-called Islamic State (IS or Daesh).

In a grim warning of what would happen if the GNA was not named soon or if the HoR did not approve it, Kobler later tweeted that the “Libyan political scene is divided while Da’esh is united & set on its destructive goal”.

In a fuller statement, the UN Support Mission in Libya which he heads, said that the Presidency Council had to keep to the new deadline for announcing the national unity government and that “all relevant political and security stakeholders” had to put Libya’s national interests “above all considerations”. With a barely veiled criticism, it said that what was needed now was “leadership, courage and determination”.

Libya, it stated was “at a critical juncture” because of the growing power of the militants

“The boldness with which terrorist groups such as Daesh have launched their latest string of attacks on key installations in Sidra, Ras Lanuf and Benghazi is a potent reminder of the need to forge a united front to contain and eliminate this growing danger.”

No effort could be spared “nor any opportunity missed . . . to halt any further expansion by terrorist groups represented in Daesh, Ansar al-Sharia and al-Qaida”.