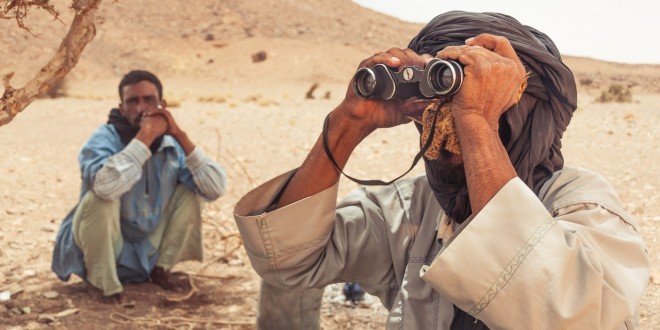 Heavy clashes shook Ubari this week, once again casting doubt on the dragged out peace talks between the Tebu and the Tuareg. The two communities are at war since August 2014, fighting for the control of the southwest Libyan desert oasis. Last November, representatives from both sides signed a peace agreement brokered by Qatar, but this has not so far affected the situation on the ground.

Fighting broke out last Sunday when Tebu forces staged an attack on Tuareg positions in the divided town, according to reports. The confrontation, which took place in the Masik neighborhood, lasted for less than three hours, local sources said, but killed at least four and injured about a dozen. Parts of Ubari’s historic castle were destroyed, as seen on photos published online. This renewed outbreak of violence came just as Tebu and Tuareg representatives were meeting in nearby Sebha, the provincial capital, to discuss the progress of the peace process. The uneasy calm reestablished after Sunday was again disrupted on Friday. One person was killed and at least seven injured, including a child, when heavy weaponry hit civilian areas.

The Tuareg Social Council – the main political body representing the Libyan Tuareg community – strongly condemned what it referred to as a “surprise assault” by Tebu forces, adding that it came in response to the Tebu – Tuareg meeting in Sebha. “We ask the Tebu dialogue committee to clarify what happened and we hold assailants responsible for the loss of lives”, the Council said. It renewed its call for a speedy implementation of the peace agreement, to which it is party.

Tuareg sources claimed that this was the third time Tebu fighters violated the November agreement. But Tebu sources countered that their fighters only attacked because Tuareg snipers were targeting civilians from rooftops in Masik neighborhood. In the course of the 17-month long armed conflict the discourse on both sides has grown increasingly violent and each side accuses the other of employing foreign mercenaries and conspiring with outside parties. As usual, Tuareg sources referred to their adversaries as “African” or “Chadian gangs”, or “mercenaries from the Justice & Equality Movement” [a Sudanese rebel group]. Pro-Tebu social media pages shared graphic photos of dead Tuareg fighters, alleging they were “terrorists from Mali” who died trying to retake the positions they lost on Sunday.

Last Sunday’s clashes pushed negotiators to speed up their efforts. On Friday, there was a meeting in Gurda al-Shati, northeast of Ubari, between members of the Tuareg Social Council and members of the Hassawna tribe to discuss the mechanism of implementing the agreement. According to Doha Agreement the Hassawna are meant to play a mediator role and man a temporary security force to separate the warring parties in Ubari. Further meetings including the Tebu side are expected to take place over the coming days.

The Ubari conflict has already taken a heavy toll on the civilian population. Most inhabitants have fled the town. Ubari Hospital, which has long been understaffed and under-equipped, has now shut down altogether, and the injured are treated in basic field clinics in areas controlled by the respective party on the outskirts of Ubari. Some badly injured patients are taken to Tripoli or Benghazi but many die on the way.

In one of its first statements, the Presidency Council of the newly-formed Government of National Accord last Sunday condemned the renewed fighting in Ubari and called for an immediate end to hostilities, appealing to conflict parties to respect the peace agreement.

While marking a turn in the protracted negotiations to end the Ubari conflict, the Doha Agreement – signed on November 22 – has been criticized for not being inclusive enough. Especially on the Tebu side, signatories of the agreement have been described as not representative and disconnected from events on the ground.

Owing to geographical factors, the Tebu – Tuareg conflict has largely remained limited to Ubari, although last July it briefly spilled over to Tayuri, a Sebha neighborhood mostly inhabited by Tuareg and Tebu. Back then, local elders managed to calm down the situation after two weeks of fighting. Last Saturday, Tuareg elders in Tayuri declared that anyone responsible for violence in Sebha would be denied social protection [i.e. protection by his tribe or community]. This statement was most probably in response to the Tebu – Tuareg talks held in Sebha earlier that day.

Although the Ubari conflict has not been dealt with as a key concern, it is believed to be interconnected with the conflict at the national level, between Libya Dawn – the coalition controlling most of western Libya – and the Tobruk-based Parliament. While the Tuareg are considered to be on the pro-Dawn side, the Tebu are seen as allies of Khalifa Haftar, the chief of the Libyan army.

Pro-Dawn security forces in Sebha were on high alert this week after reports on Tuesday that Magarha tribal forces in the Shati area had received a hundred armed vehicles from the army in eastern Libya as reinforcement. The Magarha have fought the so-called Third Force, a Misratan force stationed in Sebha to secure the southwestern region on behalf of authorities in Tripoli.