Home / Featured Articles / Beida council orders government to get out 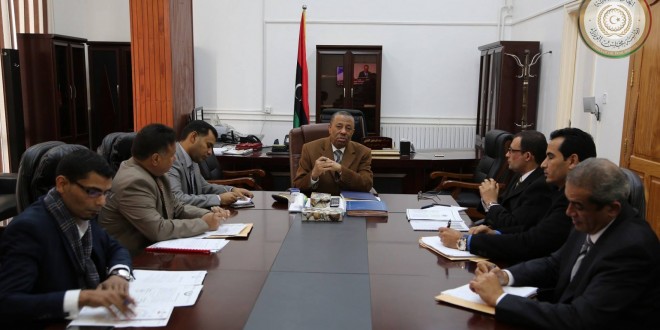 Beida council orders government to get out

In the face of daily power cuts lasting up to 14 hours, an angry Beida municipal council is trying to throw Thinni government ministries out of the overcrowded town and has given them 24 hours to quit.

The extraordinary move emerged with a document posted on the town’s social media page this afternoon, later backed up in a broadcast on Al-Jebel radio by councillor Abdullah Amtul Bunas and this evening by a TV appearance from mayor Ali Hussein Mohamed.

The focus of local anger was Abdullah Thinni’s second deputy premier, Abdulsalam Al-Badri, who is responsible for electricity. There are unconfirmed reports that angry crowds searched hotels looking for Badri whom local journalist Naseradeen Elqutany told the Libya Herald had left the town.

“Badri promised that more generating power would be brought to Beida to solve the electricity crisis, but the project has been delayed repeatedly” said Elqutany. There had also been allegations of corruption.

It appears that the recent storms and severe cold snap finally proved too much for Beida’s citizens. Their town has been used as the seat of the Thinni government since 2014 shortly after the then-new House of Representatives was obliged to relocate to Tobruk after Libya Dawn seized Tripoli.

Beida has also hosted the Constitutional Drafting Assembly which has been working out of the old parliament building in the town.

As a result, and also as a result of the fact that the it is seen as peaceful and safe, Beida has seen a massive influx of Libyans over the past two years.  Mayor Mohamed told this newspaper last month that has soared as a result from some 350,000 to around half a million.

The demand on local infrastructure has been extreme. Hotels and offices have been taken over by ministers and officials. The price of rented property has rocketed but some landlords are complaining that they are no longer being paid. So great has been the demand on telecommunications that Beida is reputed to have by far the slowest internet links in the country and mobile phone connections are poor.

One 38 year-old businessman told this newspaper: “It has been dreadful. There is no power, no money, no flour for bread and no gas”. He said that he understood the popular anger.

By this evening there had been no response from the government. It is hard to imagine how eleven ministries plus the prime minister and his three deputies and all their attendant officials could pack up and move by tomorrow night. Nor is it clear to where they might go.

Political TransitionSecurity Sector Governance
Jabal al Akhdar
2016-01-18
activate
Previous Tebu – Tuareg peace deal shaken by renewed clashes
Next Decree No. (3) of 2016 on the establishment of the Government of National Accord