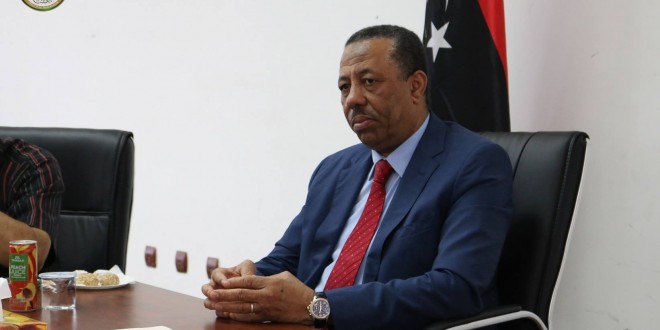 Libya’s acting government – that is expected to hand over power to the newly formed unity cabinet in coming days – is being evicted from Bayda, where has been based since 2014. Built-up frustrations in the eastern Libyan town have prompted local officials to declare the government “unwanted”  in the wake of the upcoming power handover.

In a letter issued on Sunday and addressed to acting Prime Minister Abdallah al-Thinni, Municipal Council Bayda gave the government 24 hours to leave the town, together with all its ministries and associated institutions, including the government-backed management of the Libyan Central Bank. “You are not wanted in the municipality” the Municipal Council wrote, adding “and we will not be sorry to evict you by force”.

Their anger is clearly directed at the government and its leadership. On Tuesday the Municipal Council put out another statement excluding the Central Bank from its earlier decision. “You may stay and continue working from your present headquarters”, the Council ruled.

Justifying the harsh decision, Bayda’s mayor Ali Hussein Bubakr said it was not sudden but the result of “two years of waiting” during which local officials had repeatedly asked the government to address their problems, ranging from “the acute lack of fuel” to “lengthy power cuts”, by releasing the required budgets. The shortages affected even essential infrastructure such as the local hospital, so the mayor. He accused the government of “regionalism” and applying biased criteria that “do not serve the public”.

Abdessalam Badri, Thinni’s deputy, was in Benghazi on Wednesday meeting with Municipal Council members and other representatives of Libya’s “eastern capital”. It is expected that the Prime Ministry will move its offices to Benghazi. There were also rumors that Badri left Bayda due to death threats against him.

There is some confusion these days over which of the two government is the “legal” or “acting” one. The government’s official name is “interim government” owing to the fact that it was originally nominated by an interim legislature, the General National Congress. Until the people approves Libya’s Constitution – which is still in the making after a year and a half – all state institutions are technically transitional, and the entire period – from the announcement of the Constitutional Declaration in August 2011 until the approval of the ”permanent” Constitution – is regarded as transitional. In this sense, the unity government – officially Government of National Accord – is also interim or transitional, although the term is not in its title.

What is clear is that the so-called interim government will have to step back once the GNA formally takes over. With Resolution 2259, passed just days after the signing of the Libyan Political Agreement on 17 December 2015, the UN Security Council recognized the GNA as Libya’s sole legitimate government. At the same time, Resolution 2259 called upon UN member states to “cease support to and official contact with parallel institutions that claim to be the legitimate authority but are outside of the Agreement as specified by it.” On Monday, the EU Council recalled the text of the UN resolution and called for Libya’s Constitutional Declaration to be amended.

In order to become legal, the GNA needs to be formally endorsed by the House of Representatives, Libya’s internationally recognized parliament. For this to happen, the HoR needs amend the Constitutional Declaration to include the Libyan Political Agreement in the timeline of the political transition. It is not guaranteed, however, that the HoR will approve, as the legislature is divided over the Political Agreement and its President, Agila Saleh Gweider, has been unable to convene a plenary session.

There was some commotion in Bayda on Tuesday when a group staged a protest in front of the local branch of the National Commercial Bank, which was closed earlier this for lack of cash. Photos circulated online showed burning tyres in the town center. The liquidity problem has been affecting people across eastern Libya and massive queues have also been reported from Tobruk in the past few days.

Reports of an attack on the Constitution Drafting Assembly, which is also based in Bayda, by a local police unit have however been denied.

Ali Tarhuni, who heads the CDA, told Libya Channel on Tuesday afternoon: “There was no attack on the Assembly or its members. What happened was a misunderstanding in the Bayda Municipality and the Assembly has got nothing to do with it.”

The government has been operating out of Bayda since July 2014, when armed coalition Libya Dawn seized power in Tripoli, evicting the government and reinstating the general National Congress, Libya’s rival parliament. Prime Minister Thinni, who was Defense Minister under Libya’s former Premier Ali Zeidan and took over when the latter was ousted in March 2014, resigned in August that year in order to allow for the HoR to legally form a government. In September 2014 the HoR reappointed Thinni and later approved his new cabinet.

Among the state institutions and entities affiliated with the government based in the eastern Libyan town is also the Libyan Audit Bureau, as well as state-owned TV station Al-Wataniya. If Bayda’s Municipal Council insists on its decision to evict the government, these entities will have to move as well.

On Sunday, the day the Municipality issued its decision, UN Special Envoy Martin Kobler was in town meeting with eastern Libyan HoR members, as part of his attempts to gain more support for the Libyan Political Agreement and the GNA.

Bayda was among the three only eastern Libyan municipalities that signed the Political Agreement as part of the group of the so-called “witnesses” on December 23.

This is only an excerpt. You can read the full article on Libya Channel