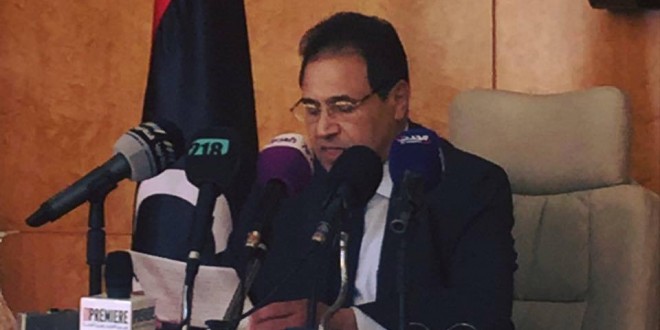 Presidency Council member Omar Al-Aswad, who suspended his membership of the body earlier this week over the composition of the new government of national unity, has accused other members of behaving dishonestly in the matter. There had been moral and political corruption in the way they had acted, he said. The government was, moreover, too big and with ministers chosen not on the basis of competence but on cronyism, it would not work and was not what Libya needed at present, he said.

In a remarkable account of what had actually caused him to suspend his membership, he told the Libya Herald that the process had been hijacked, with a decision agreed by the council to go for a slimmed-down crisis cabinet suddenly overturned without the involvement or knowledge of other council members.

There had been an initial proposal from two council members – he refused to name them – for a government of 24 members. However, after the council had failed to meet the 16 January deadline, the next day, the Sunday, he had proposed that there be government of just ten ministers. “Everyone accepted the proposal”, he said.

But because there was then a meeting with the EU and with UNSMIL, “we agreed we would meet the next day, the 18th, and chose the names”. The idea was to then look at the CVs of potential candidates and make the choices.

It had also been agreed, he added, that each of the Presidency Council’s nine members would nominate a particular minister and that prime minister-designate Faiez Serraj, as its head, should have a second nomination for the tenth minister who was to head the finance ministry. He himself, he said, was to select the minister of local government.

“I said I would not name anyone from my own town [Zintan] so as to avoid talk of favouritism.”

However, others, he claimed, had said they would name the ministers they wanted.

“The next day, very early in the morning, I received a phone call telling me that the two members had not slept all night and had created a new government with 24 ministries.”

These, he said, were the same two who had originally wanted 24 ministers.

“I waited to be sure of the news. I waited till midday and did not take any calls. I then went to the meeting hall and found no one there. Then I realised that there was truth in the phone call.” At around 6.30pm, he added, “I got a call to come to the meeting. Serraj was not there but everyone else was, except [Ali] Gatrani who had suspended his membership the night before for different reasons.”

Aswad asked about the changes. They confirmed them. As a result he left the meeting and went to see Serraj, who was waiting for him.

“We met alone. He took two pages from his pocket telling me to look at the names and the posts. I told him to keep them, that I did not want to see them, that it did not mean anything to me.”

Aswad protested that the changes had been made after everyone had agreed on 10 ministers. He demanded to know who had changed the plan, and why.

He then told Serraj that the council either revert to its unanimous decision to have ten members and get on with selecting the names or, together, start the whole process over again.

He added he then told Serraj that he could call him to go to the meeting but that if he did not get a message by midnight he would suspend his membership of the council.

“I was not called by midnight,” he said.

As a result was he did as he promised, informing the press of his decision. “I left the Residence Hotel [where the Presidency Council has been meeting] at 4 am.”

There were further shocks in the morning, he said. “It was not 24 ministries, but 32.” Some were now divided, such as the foreign ministry now split into three (Foreign Affairs, International Cooperation, and Arab and African Affairs). At no previous point, he insisted, had such divisions been discussed.

There had, moreover, been clear cronyism in the choice of some ministers. “One ministry was given to the office manager of a member of the Presidency Council. Another of his staff was given a separate ministry.” Five ministries were given to relatives of Presidency Council members, he further claimed.

“This is not acceptable” he said, accusing other members of administrative and political corruption.

The ministers had been chosen not for their capabilities but for their contacts. Criticising the appointment of Marwan Ali Abu Sraiweil as foreign minister, he asked what were his qualifications for the job. “His most senior post was head of civil social affairs in the ministry. Yet we have ambassadors with years of experience.”