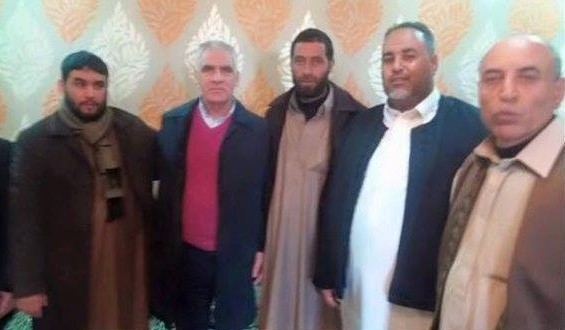 After four days as hostage of a family in Tobruk, the eastern Libyan town where the country’s Parliament is based, MP Mohamed al-Raidh was released Saturday afternoon.

Local elders and representatives, who mediated during the hostage taking, escorted Raidh to the Parliament building. The affair has been described as “social and not political issue”, but the timing and location brought it to the political agenda and the attention of the international community.

Raidh was being held captive in the house of a well-known family in Tobruk, where he had arrived Monday to join a debate session in the House of Representatives on the Libyan Political Agreement.

The businessman from the western Libyan city of Misrata came to Tobruk for the first time since being elected MP in June 2014. He was among the two dozen parliamentarians boycotting the HoR after its predecessor, the General National Congress, refused to relinquish power.

Ten of the HoR boycotters flew into Tobruk on Monday to join fellow lawmakers in accordance with the Libyan Political Agreement that a part of the HoR and the GNC signed in December to end the 18-month old civil war. Eventually the HoR decided to go ahead with its long-awaited vote without the boycotters, endorsing the LPA with reservations and rejecting the proposed GNA cabinet. On Tuesday a special session was held to welcome the newcomers, followed by a discussion on the amendment of the Constitutional Declaration, which is required to inscribe the LPA into the transitional process. The debate was ultimately adjourned as the HoR will have to meet again once the GNA Presidency Council has drawn up a new cabinet.

Raidh was expected to catch a plane back to Tripoli on Wednesday together with his western Libyan colleagues, but around noon he was reported missing. A number of conflicting reports followed his unexpected disappearance.

During a brief phone call with a media representative, Raidh said he was with a “respectable family” and that the HoR was involved in “solving the issue”. Subsequently, his phone was switched off.

The HoR was hesitant to take a clear position. Still on Wednesday afternoon, Abdallah Blihaq from the HoR Media Administration issued a statement in an apparent attempt to play down the situation. “This is not a kidnapping” he said, but “the action of civilian youth from the city [Tobruk] who have a message” assuring that the “youth” were “not forcibly detaining or harassing” the MP, who was already “on his way back to the HoR headquarters”.

But as Libya Channel correspondent Khaled Mahmud clarified in the 9pm news bulletin, Raidh was still in the house of said family in the evening, and first mediation efforts by local dignitaries had failed.

Tobruk security sources confirmed that the family was demanding that two men from Tobruk detained in Misrata be transferred to a prison in the eastern region. The two men – including a son of the family – are held in a Misrata detention center, where they have allegedly spent two years of a 10-year sentence for drug trafficking. “Haj Ibrahim”, the head of the family, claims that the two men have suffered from bad treatment and that his son’s leg is broken. Through the kidnapping of a Misrata MP, the family is trying to exert pressure on Misratan authorities to give in to their demands.

Tobruk’s local authorities and representatives tried to solve the issue peacefully through conventional mediation, as they did not want the security agencies to intervene by force. After four days and the intervention of the HoR President their efforts finally resulted in Raidh’s release.

Libya has been plagued by an increasing number of abductions, mainly in western Libya. The abductions are mostly for ransom, although blackmail such as in Raidh’s case is also not uncommon. Tribal and local conflicts in western Libya have frequently resulted in armed groups abducting civilians from rival towns to put pressure n their adversaries. On the same day Raidh was seized, another HoR member – Nabil Aun from Aziziyah – was released after being kidnapped by an armed group in Tripoli on 30 November 2015.

However frequent abductions may be, Raidh’s case is an embarrassment for the HoR, which has been portraying its temporary headquarters, Tobruk, as safe, and blaming the GNC for not doing more to help abduction victims in wes tern Libya.

On Thursday, UN Special Envoy Martin Kobler said he was “extremely upset by this unjustified and unacceptable act,” and called on influential actors to ensure Raidh’s “immediate and unconditional” release.”MP al-Ra’id should not pay the price for his courageous decision to uphold the national interest, risking his life to rejoin the House of Representatives in accordance with the Libyan Political Agreement,” Kobler said in a statement. The EU mission to Libya has also condemned Raidh’s abduction.

Raidh’s hometown Misrata also called for his immediate and unconditional release. “The issue gives the impression that Tobruk is not safe and that the HoR cannot exercise its duties freely in the town”, a Municipal Council spokesman said Thursday.

The HoR is under scrutiny and its dealing with the situation will be seen as indicative of its capacity to overcome future crises as Libya’s sole legislature under the peace agreement.

HoR President Agila Saleh Gweider is in contact with relevant official and tribal parties to obtain the lawmaker’s release, a spokesman said.

If this is not achieved within the next days, the issue is likely to affect the HoR’s work and delay the next steps pertaining to the GNA. Also, there are fears that the HoR’s other “new” members from western Libya might not be willing to return to Tobruk for the upcoming parliamentary debates.

Among the guests on Libya Channel’s Newsroom debate Tuesday evening, al-Raidh was optimistic about the latest developments.

The adoption of the LPA was positive, he said, arguing that the freezing of Article 8 was “not a blow to the LPA” as the issue would have to be dealt with by specialized committees. “We trust that the Presidency Council will do whatever necessary for the country”, Raidh said.

The Misrata MP was also optimistic regarding the security situation, saying that the implementation of the LPA would “end” the war in the east and refocus all attention on fighting the IS Group. Regarding the western region Raidh thought that “many of the armed groups support the unity government and are waiting for it to start its work”.

DetentionSecurity Situation
ButnanMisrata
2016-01-30
egeoffroy
Previous Italian Defense Minister Warns About Uncoordinated Action on Libya
Next France warns of IS crossing the Med to Europe, US mulls military action in Libya