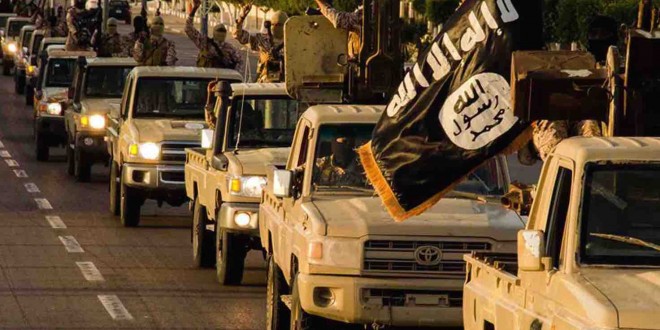 Public beheadings and roving jihadist gangs are terrifying residents in the Islamic State group’s Libyan stronghold of Sirte, in an ominous sign of the movement’s growing international influence.

Witnesses tell of amputations and executions in squares in Moamer Kadhafi’s hometown on the Mediterranean coast, where women can no longer go out without a male guardian.

“The situation is tragic. Civilian life has disappeared and the scenes we saw on television from Syria and Iraq now apply to people here,” a Sirte municipal council official told AFP on condition of anonymity.

“Those 180,000 people who have stayed are now hostages to fear and terror.”

Libya has been in chaos since the NATO-backed ouster of longtime dictator Kadhafi in 2011.

Several attempts to reunite its rival governments have stalled, allowing extremist groups such as IS to make sweeping gains in the oil-rich nation.

Under growing pressure in Syria and Iraq, IS has transformed Sirte into a training camp for Libyan and foreign militants since overrunning the city in June.

With its port and airport, there are growing fears that IS may use Sirte, 450 kilometres (280 miles) east of Tripoli, as a staging post for attacks on European soil.

The US-led coalition conducting bombing raids in Iraq and Syria this week voiced concern over “the growing influence” of IS in Libya, although it stopped short of threatening air strikes.

According to another official on a Sirte district council, the extremist group wants to turn the city into a “major jihadist sanctuary” on the shores of the Mediterranean.

“Very young school children, separated into girls and boys, learn the same jihad that their parents learn in the mosques,” the official said.

Kadhafi spent much of his four decades in power attempting to turn his hometown into a regional political hub, repeatedly unveiling proposals to see Libya’s parliament and government ministries shifted eastwards to Sirte.

One relic of the strongman’s fixation with the city is the Ouagadougou Centre, an enormous conference hall built to host world leaders after the foundation of the African Union.

The sprawling complex, which once hosted summits of Arab, African and Western leaders, is now used by IS for “religion lessons”, according to the local council official.

He said locals have renamed the hall “Fallujah” after the Iraqi city now occupied by IS and made famous for some of the bloodiest street battles in Iraq’s modern history.

Residents attend the indoctrination sessions delivered by IS, the official said, out of “fear of being punished”.

After years of preferential treatment under Kadhafi, Sirte became something of a pariah city after his fall, its landscape devastated by some of the uprising’s most fearsome battles.

Videos released by the extremist group from Sirte vary between the mundane — “normal” city life featuring bakeries and shopping centres — to scenes of extreme brutality including violent executions in public squares.

Last month, four young men accused of “blasphemy and espionage” were killed in public by IS, which also released a photo this week detailed three other residents it had put to death, allegedly for spying.

The municipal council official told AFP that as many as 37 people had been executed in Sirte by the extremists since IS swept into the city.

“Most were Libyans but others were Arab nationals, including Egyptians and Moroccans,” he said.

Local officials say that around 7,000 families have managed to flee Sirte, leaving mainly for Tripoli or Misrata, 200 kilometres further east.

They accuse both Libyan governments — the internationally recognised administration which fled to the east of the country and Tripoli’s Islamist-dominated legislature — of turning a blind eye to “marginalised” Sirte.

Yet many residents prefer to live among the ruins than leave, despite the sense of abandonment that IS exploited to rapidly force its will on the city.

“Since they came to power, the new Libyan authorities were more concerned with football matches than with Sirte,” the municipal official said.