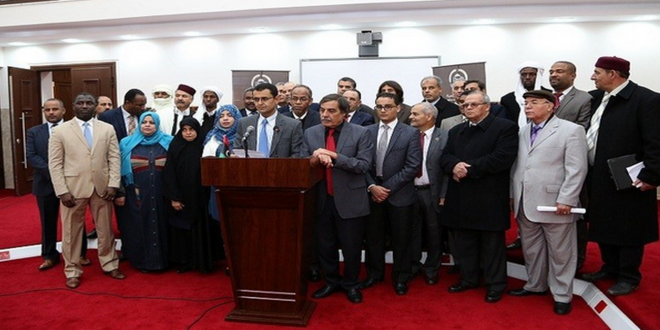 Libya, a state with three capitals!

The second draft of the Libyan constitution is ready and would be submitted to the office of the chairman for revision, the Action Committee of the Libyan Constitution Drafting Assembly announced on Wednesday, a step that was met with rejection from some of assembly members from the west.

In a press conference in the eastern city of Al-Bayda, the committee said the draft would be discussed with other assembly members before a vote on its articles takes place.

The proposed draft states that the official name of the country would be “the Libyan Republic” instead of the current name “State of Libya,” with 3 capitals representing the country’s 3 regions.

“Tripoli would be a political capital, Benghazi an economic one and Sabha would be a tourism and cultural capital.” The draft states.

Meanwhile, the boycotting committee member from Tripoli Salem Kishlaf said the announcement of draft completion was illegal, as two members of the committee have already boycotted it. He also pointed out that the draft calls for division in the country and was built on interests.

Last week, 11 members of the Constituent Assembly suspended their membership in protest against what they described as regional tendencies of some of their fellow members and chairman Ali Al-Tarhouni’s management.