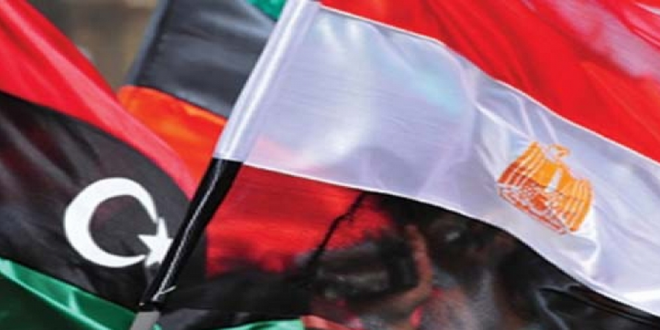 Speculations about Egyptian intervention in Libya

The international military intervention in Libyan became imminent, especially the Egyptian, according to a report by Alaraby Al-Jadid website. Sources believe that the intervention is becoming a must before Libya is turned to another Syria or Iraq. Information leaked by insider sources spoke about the Egyptian arrangements for intervening in Libya. LIBYAPROSPECT translates the report for its readers.

Alaraby Al-Jadid report believed that the intervention has become so close, according to clear excitement of the Egyptian regime in favor of the retired General Khalifa Haftar. The Egyptian Foreign Minister, Sameh Shokry, told Reuters last Tuesday that Libya needs a united government before talking about military intervention, noting that “this operation must be Libyan led”. It is notable that, during the past 2 years, some forces intervened against the Islamic State group (IS) in Libya, while unidentified planes started targeting Libyan locations that America uncovered that they were Egyptian and Emirati.

The report said that observers believe that Egypt is intensifying its arrangements in accordance with neighboring countries and other countries, especially Italy, for intervening in Libya, and through arrangement on boarders, after the Government of National Accord (GNA) is seated and arms embargo over Libyan army.

Sources told Alaraby Al-Jadid that the Egyptian army has been intensifying its presence along its borders with Libya and especially along the past few months. Squad 777 and borders guards’ troops were also deployed there, along with increasing patrols along the borders.  Sources pointed out that there are instructions not to access the rugged mountainous areas, in order to prevent the targeting of military forces easily, since last week an officer was killed during a raid on smugglers’ locations in the mountainous area.

Sources stress that all these arrangements are in line with the possibility of intervention after international consent.

Arrangements are based upon banning armed persons from sneaking into Egypt and carrying out aerial survey of the borders all day long to monitor locations and movement of the armed elements in Libya including the IS and other groups to target them or report to the other partners in the intervention. Sources stress that Egypt raised the alert condition in these border areas.

The report stated that communications are underway between intelligence agencies and pro-Haftar Libya tribes to report movements of the IS and other groups in arrangement for any possible intervention. In case the intervention is approved, the Egyptian role will be mainly in shelling and logistic support in addition to exchanging information about the armed elements.

Sources add that Egyptian fighter pilots travelled to France for training on using Rafal jets that are expected to take part in the operation.

In the meantime, Libyan sources confirm for “Alaraby Al-Jadid” the readiness of the various armed groups of any military intervention in Libya, but the biggest challenge for them is to air operations.

The sources say that “armed groups in Libya are not afraid of any ground intervention, but on the contrary will overtake it to a large extent, especially as they are familiar with street fights”.

The sources added that the armed groups may resort to the desert in the event of military intervention in Libya, in order to facilitate the hit-and-run, as well as minimizing access to the area for any bombing operations targeting elements.

The sources add that the armed groups will distribute its elements as small groups in different areas, to prevent any significant losses.

The same sources exclude wide ground intervention in Libya, due to the large presence of armed groups that may face the international forces.  According to these sources, the IS resides in west and south of Derna, as well as Tripoli and Benghazi, but not dramatically, along with the Sirte and the surrounding areas.

The military expert, Maj. Gen. Yousri Qandil, excluded ground intervention in Libya particularly in light of the nature of the situation there and the presence of many armed groups.

Qandil said that “the ground intervention will be costly, which is what any terrorist group wants” stressing what he calls the “wisdom of the Egyptian military leadership in dealing with these things”.

He adds that the military intervention in Libya, “is essential to counter terrorist groups there, which represent a serious threat to Egyptian national security”. He stressed that the intervention must happen with High-level coordination between Libya’s neighboring countries and international powers to coordinate, and exchange intelligence Information to achieve the highest possible result.

He also points to the importance of “waiting for the formation of the Government of National Accord (GNA) to take over the country’s affairs after the completion of this danger to the entire Arab region.