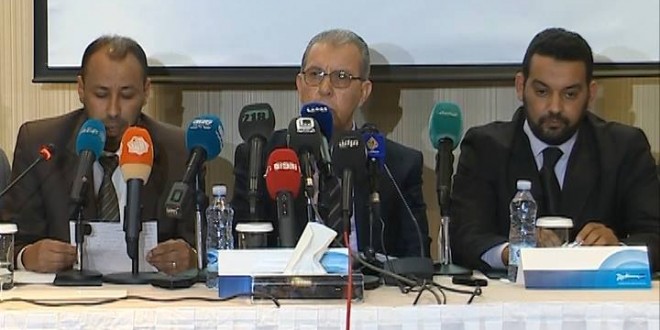 Committee of National Accord Gatherings arrive at political solution project

The 21-member Committee set up by the National Accord Gatherings unveiled in a press conference Sunday a roadmap to solve the political crisis between the General National Congress and Tobruk parliament.

The committee clarified that the project is manifested in amending the 1963 constitution by a new committee to be formed by the GNC and Tobruk parliament.

It stressed that the Nation Council, which is made up of two rooms: the HoR (Tobruk parliament) and Senate (GNC), should take up the legislative and inspecting tasks until the new legislative authority modeled on the amended constitution is elected, pointing that the current constitutional declaration must stay valid till the new one is approved.

As for the executive authority, the committee’s roadmap proposes a President of State position to be nominated by the Nation Council along with the Vice President, after that, the President will name the Prime Minister, assign him the duty of forming a new government, and present it to the Nation Council for vote of confidence.

The National Accord Gatherings, which took place in Gharyan, Tripoli and Misrata, have all called for forming a new government of national unity, reaffirming at the same time its rejection for the Skhirat-signed agreement.