Home / Normal / UN report on attacks and assassinations in Benghazi 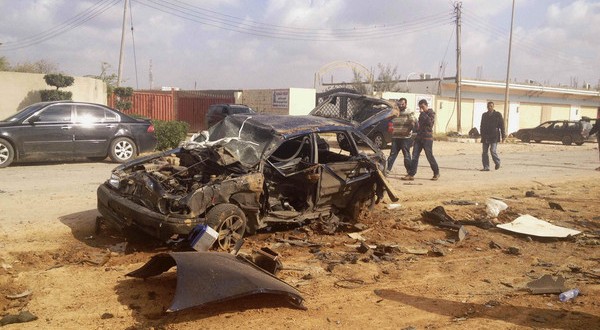 UN report on attacks and assassinations in Benghazi

A report on Libya by team of experts in Security Council suggested that the second group of Libya Shield forces is involved in attacks on police, explosions, and assassinations in Benghazi.

It stated that Mohamed Al-Araiby, who was killed in March 2015, and his deputy, Waleed Al-Masry, were involved in bombing a training camp for the Libya Special Forces in addition to attacks on police forces in Benghazi in 2013. It also added that the first group of Libya Shield forces led by Wesam Ben-Hmaid organized assassinations against activists in Benghazi and recruiting foreigner elements for executing it.

The report referred to a video spread by the army in November 2015 that uncovered Ben-Hmaid’s involvement in trying assassinating the army colonel, Al-Mahdy Al-Barghathy, a nominee for defense ministry in the Government of National Accord (GNA).

It expressed concern over kidnappings in the west, where foreign abductees are used as cards for blackmailing their countries. Tunisians were abducted in August 2015 to exchange them for Waleed Al-Gleab and in October 2015 to be exchanged for Hussien Al-Dawady.

The report added that many were abducted or killed in inspection points in South; sometimes they were picked for their tribal affiliations. An example is inspection point 60 that is controlled by Ajdabiya Shura Council of Revolutionaries and a point controlled by Ahmed Al-Sharif battalion (Tabu tribe) on the road between Al-Kufra and Ajdabiya.