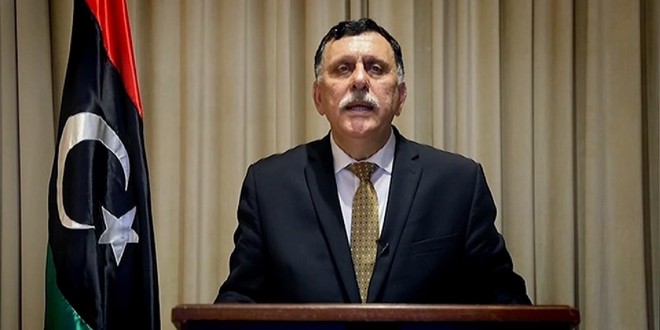 The leadership of Libya’s unity government sailed into Tripoli on Wednesday defying demands by the rival administration for them to leave or “hand themselves in”.

Prime Minister designate Faiez Serraj and other members of the Presidency Council – the core of the Government of National Accord agreed to in a UN-backed peace deal – entered the capital by boat and set up their offices in a naval base.

Tripoli’s National Salvation Government – which is linked to armed coalition Libya Dawn that swept control of the capital in 2014 and reinstated former legislature the General National Congress – had closed the airspace for several hours Sunday and Monday amid rumours Serraj and his team would fly in. Affiliated armed groups had fired in the air around the airport and reportedly lined the tarmac with anti-aircraft trucks.

Navy spokesman Ayub Gassem said as it was not possible to fly Serraj and his presidency council into Tripoli they opted to arrive by sea, defying the warnings. “We sent two speedboats to Tunisia to pick up them up,” he told.

Gassem also explained that the Tripoli operation had been in preparation for over a month and was part of security arrangements made by the Temporary Security Committee (TSC), which was tasked to prepare the ground for the GNA’s takeover as per the December peace deal.

According to TSC head Abderrahman al-Tawil, the naval base, which is located in the east of the capital, will be the GNA’s temporary offices until its planned headquarters is handed over. The army officer assured that Presidency Council members were safe, for now.

“Armed formations linked to the [Presidency] Council are securing the naval base and are ready to repel any attack”, Tawil said, conceding that more support was required.

In his first press conference from the Tripoli base on Wednesday afternoon, Serraj vowed to push ahead with taking over state affairs.

“The Presidency Council will work to unify state institutions and implement a package of urgent measures to alleviate citizens’ suffering,” he said.

Serraj also said the Presidency Council had already taken first steps to “unify” the Central Bank of Libya and the National Oil Corporation, which manages the Libya’s lucrative oil revenues.

The Prime Minister designate renewed his appeals to critics to support the unity government. “The government is committed to the terms of the political agreement and seeks to achieve national reconciliation, as well as the return of displaced people,” Serraj assured.

“We will hurry up on the issues of national reconciliation and reparations. It is time to work together for Libya’s sake.”
The Tripoli authorities, taken by surprise, demanded that he and his colleagues leave, calling the unity government ”illegal”.

“The entry of the proposed Presidency Council into Tripoli is illegal. We won’t leave the capital until the Revolution is ensured,” declared Khalifa Ghwell, Prime Minister of the Salvation Government.

“Will we pursue the goals of the February 17 Revolution or other goals like the return of the previous regime?”, he asked, insinuating that the GNA is supported by former Gaddafi loyalists. Ghwell also appealed to “revolutionaries” to close ranks against the unity government.

“My call to those infiltrators is to surrender themselves to the law or go back to where they came from,” he added.

This echoed statements by the General National Congress, whose spokesman Omar Hmidan said the GNA’s entry into Tripoli constituted a “coup d’Etat”.

“The Presidency Council has no right to work, according to the Constitutional Declaration, because the latter has not been amended yet,” Hmidan argued, referring to the clause in the peace agreement that says it has to be inscribed into a 2011 transitional constitutional text.

Al-Sadeq al-Ghariani – the country’s Grand Mufti and head of the National Fatwa Authority who has come to be Libya Dawn’s religious leader – also bashed and threatened the GNA on his TV channel Tanasuh Tuesday evening. Ghariani emphasized that the GNC remained Libya’s only legitimate body and urged citizens to obey its orders.

“What happen today is dangerous because there are weapons in every Libyan household”, the Mufti warned, adding that people would “go to Jihad” against the “foreign government”.

“I advise [Presidency Council members] to come to their senses and not cause bloodshed”, Ghariani said. “They should leave the country before opening the doors of Jihad”, he insisted.
Faiez Serraj and his Presidency Council were appointed as part of the Libyan Political Agreement signed in Skhirat, Morocco, on December 17 by representatives from both warring camps. They have secured the backing of the UN, EU and numerous other countries.

But in order to legally function, the GNA has to be endorsed by the internationally-recognized parliament, the House of Representatives – which is has been anchored in the eastern city of Tobruk since Dawn’s takeover. Attempts to hold a vote on Serraj’s ministerial lineup – the second of which he presented at the start of February – were scuppered by opponents to the GNA within the house.

A document signed by 101 HoR lawmakers endorsed the GNA, which Serraj said was enough to push ahead and assume power in Tripoli.

But on Wednesday Fathi al-Marimi, a spokesman for HoR President Agila Saleh, said its arrival was “premature”. “They have entered by force under foreign protection, and Libyans won’t accept anything imposed on them by force,” he said.

Abdallah al-Thinni, the Prime Minister of the HoR’s Interim Government has also accused the GNA Presidency Council of trying to “usurp power”. “Some local and international parties are conducting a policy of persecution and starvation directed against the Interim Government”, he claimed in a press conference in Benghazi on Tuesday.
Nonetheless the international community welcomed Serraj and his Council’s arrival to the capital.

UN Libya envoy Martin Kobler said the international community was “ready to provide the required support and assistance”, and that all Libyan security actors had a responsibility to ensure its safety.

The EU, as well as the French, British and Italian foreign ministers also greeted the move.

“We stand ready to respond positively to requests for support and assistance from the GNA to help them restore stability to Libya, rebuild the economy, fight Daesh (IS) and tackle the criminal gangs that threaten the security of Libyans and exploit illegal migrants,” said British Foreign Secretary Philip Hammond.