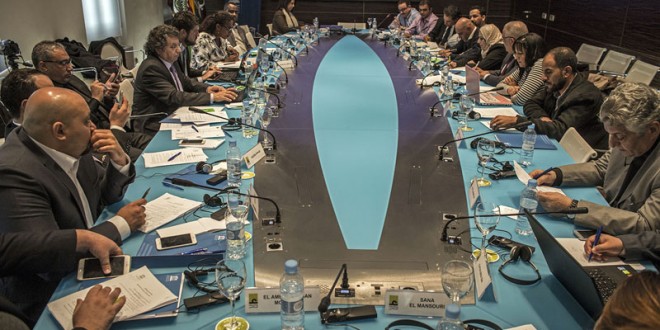 The media practitioners and journalists suggested a significant set of reforms to improve professional criteria and to defend freedom of expression so that it would be an essential cornerstone of the Libyan society. They also agreed, in a symposium organized by the UNESCO, to launch joint initiatives to promote social cohesion to be in line with Libyans demands.

The work plan is based on, according to the United Nations Special Mission in Libya (UNSMIL), agreements from the previous meetings and the proposed charter of honor of media men and journalist ethics.

From his side, the Spanish Minister of international cooperation, Jesus Garcia Aldaz, stressed that “the critical role journalists and media practitioners play in empowering social dialogue and consensus.”

Khaled Bahloul, the owner of Tobactos, described the outcomes of the third Madrid meeting as “Quantum leap towards specific goals we seek to accomplish, especially after the success of all previous phases in Madrid, Vienna, and Oman to promote professional commitment and the charter of honor in crisis times”.

The journalist Soad Salem expressed her hope to implement fully the work plan all participants agreed on. She added that “as those who put it represent different sects but agreed on diverse issues.”

The UNESCO regional manager, Ghaith Fares, said that “this work plan is a remarkable advance since our first meetings in Madrid last summer. Such work in an excellent example of the critical role media should play in national reconciliation”.