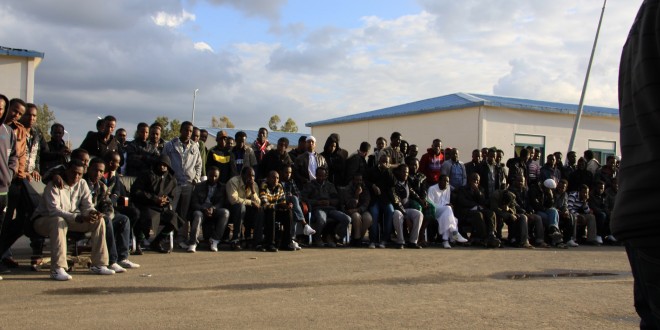 Trend of violent deaths, exposure, starvation and dehydration for migrants in North Africa:IOM

At least 250 migrants have died in Libya and Sudan out of 471 deaths and disappearances recorded on the African continent this year by the International Organization for Migration’s (IOM) Missing Migrant Project. This week, the remains of 34 migrants were found near the Algerian-Niger border.

“At least 250 migrants have died in Libya and Sudan alone, many due to exposure, starvation or dehydration in the Sahara Desert,” explained Julia Black, a researcher with IOM’s Global Migration Data Analysis Centre (GMDAC) in Berlin.

“There is also an alarming trend of violent deaths for migrants in North Africa, with dozens of cases of physical and sexual abuse of migrants directly leading to their death. It is likely that many more cases go unrecorded.”, She added.

The IOM’s Displacement Tracking Matrix (DTM) operations estimate the passage this year of at least 120,000 migrants since January through Niger. Many of these transit to Europe across the Mediterranean through Libya.

At a press conference in Brussels on 7 June, High Representative of the European Union for Foreign Affairs, Federica Mogherini said that ‘‘We know very well that around 75 to 80 percent of the migratory flows to Libya go through Agadez, in the north of Niger’’.

Temperatures along migration routes through the Sahara frequently reach well above 40 degrees Celsius, and the remains of the 34 migrants found near the Algerian-Niger border indicates that smuggling practices can be extremely deadly for migrants, the report says. The dangers of the heavily used route through the Sahara indicate that these deaths may be only a fraction of the true number of migrant fatalities across North Africa, the report adds.

In nearly 18 months since the start of 2015, IOM’s Missing Migrants Project has recorded 678 deaths of migrants across the African continent with North Africa accounting for 407.

“These tragedies are in addition to the thousands of Africans who have died after successfully arriving at one of the many coastal launching zones, yet who fail to reach their destinations,” Black said.

Giuseppe Loprete, Chief of Mission for IOM Niger, this week said the deaths reported were of the 34 migrants found near the city of Arlit, a desert crossroads near Niger’s border with Algeria. He noted the discovery that most of the 34 victims were women or children which indicates that these are migrants from villages in southern Niger.

He said the cost of travel on this route – about USD 300-500 per person – runs about half the cost migrants currently are being charged to reach Libya from Niger. The Algeria route attracts poorer migrants, Loprete explained, migrants who may be exploited and forced into the sex trade and begging (especially minors) once they reach their destination. He added this route also may be even more dangerous than the path to Libya. “Many more die that are not even reported,” Loprete said.

Meanwhile, the IOM today reported an estimated 213,581 migrants and refugees entered Europe by sea in 2016 through 15 June, arriving in Italy, Greece, Cyprus and Spain. Deaths so far this year are 2,859 compared with 1,838 through the first six months of 2015. Fatalities on the Mediterranean Sea in 2016 stand at 1,020 ahead of last year’s mid-year total, three weeks shy of 2016’s mid-year point.

Meanwhile, MSF today announced that it will no longer seek funding from the EU or Member States in response to Eurpoe’s ‘’dangerous migration policies’’.

‘’We cannot accept funding from the EU or the Member States while at the same time treating the victims of their polices! Its that simple’’, MSF tweeted.

MSF was very critical of the EU-Turkey deal which it said ‘’is presented as humanitarian but there is nothing humanitarian about hiding suffering offshore. Until there is a policy drive towards taking people in and focusing on individual needs – we will not seek EU or Member State funds’’.

Europe’s attempt to outsource migration control has a domino effect, with closed borders stretching all the way back t0 Syria.”

‘’None of our patients will be affected by this decision. We will use emergency funds to keep our projects running. We cannot take funds from those who do so much harm’’.

‘’We reject the instrumentalization of humanitarian aid for the sake of border control and cannot take money from governments who misuse aid’’.

It will be recalled that the EU had announced its new carrots and sticks policy dealing with illegal migration from Africa, whereby aid to the African states from where most migrants originate would be conditional on those states doing more to discourage their citizens from migrating.

The UN OCHA’s latest Humanitarian Bulletin, meanwhile, says that ‘’the continuing dire conditions in Libya’s detention centres are increasingly in the spotlight. The migrants rescued in May were transferred to detention centres in Al Zawiya, Abu Eissa and Shuhada’ Al Nasr, which are all severely over capacity’’.

‘’One centre has a capacity to hold 1,000 migrants, yet is currently holding 2,000 people. The ability of the detention centres to provide initial emergency assistance and meet critical needs is severely strained’’.

‘‘The capacity of humanitarian responders is also reaching limits. The Libyan Red Crescent (LRC) is unable to meet the demand to respond to casualties at sea, especially for the management of remains, including transportation, storage, and burial’’.

‘‘IOM has delivered 600 hygiene kits in the week of 24 May 2016 in coordination with Shiekh Taher Alzawy Charity Organisation (STACO) and Psychosocial Support (PSS) to both Abu Eissa and Al-Shuhada Detention Centres’’.

‘‘To support the capacity of the LRC to handle the remains of those who have perished at sea with dignity and respect, IOM has delivered 1,200 body bags to LRC offices across Libya’’, concludes the report.