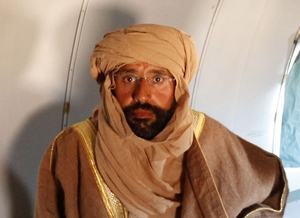 News on releasing the son of Muammar al-Gaddafi Saif Al-Islam, is still circulating in media sources. Some sources confirm that he was freed from capital punishment earlier this year, and now it seems to be that Saif is roaming the streets of Libya, even though he faces charges for crimes against humanity at the International Criminal Court (ICC).

Initially, Saif was sentenced to death by firing squad last year; he was found guilty of war crimes. Saif was thought to be imprisoned in the western city of Zintan. However, Karim Khan, Saif’s lawyer, said that Saif had been released from prison in April and was free in Libya.

Saif was captured in November 2011 and was later charged in a Libyan court with war crimes, and sentenced to death. The ruling was widely criticized by the international community as it was seen to be that he was unfairly trialed. He is still wanted by the ICC to face charges of crimes against humanity during the 2011 uprising.

On the other side, another source confirmed that Zintan revolutionaries denied, on Wednesday, what Arabic media sources circulated about releasing Saif-Al-Islam.

Zintan revolutionaries said that despite the letter from The Interim Government affiliated to the House of Representatives (HoR), that placed the order to release Saif-Al-Islam, “but we haven’t released him, and we confirm that he is still in his prison in Zintan” they said.