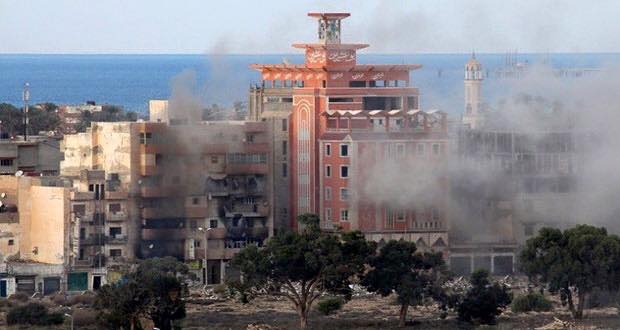 As IS-held territory in Libya shrinks, the US and EU will be tempted to abandon diplomatic engagement – but they shouldn’t

This week, the US began launching air strikes in Libya. If war is the continuation of politics by other means, it is important to look not just narrowly at what war the US and other countries are waging in Libya, but also what their policy is – and what it should be.

Americans and Europeans have been deeply engaged in the diplomatic process that led to the creation of the Government of National Accord (GNA) now sitting in Tripoli. It is this government, headed by Faiez al-Serraj, that requested US strikes.

Joint US and European action led Russia and regional powers – first and foremost Egypt and the United Arab Emirates – to sign up for extended support to the GNA, despite their hearts, wallets and arms stockpiles sitting on the side of the rival government in Tobruk. And the US, UK, France and Italy are conducting negotiations with regional powers in order to get General Khalifa Haftar to serve under the GNA.

Americans, in close cooperation with the UK and the EU, have been crucial in implementing a series of economic measures that were instrumental in de-escalating the conflict in Libya and moving the parties towards an agreement. For instance, they helped to keep the main Libyan economic institutions independent and separate from the schism between different Libyan governments and then pushed the institutions to support the GNA once it was formed.

Perhaps most critically, the US has been at the forefront of efforts to make sure that only Libya’s central government could sell oil, effectively discouraging any attempts to split the country.

And then, there is the military involvement. What’s new about the current US bombings is that they are part of a coordinated campaign – which Obama says will last 30 days – rather than isolated strikes. They have been and will be launched at the request of the recognised Libyan government and, therefore, comply with UN Security Council Resolution 2259, which states that no member state can intervene against the Islamic State group (IS) in Libya without being requested to by the recognised government.

But this week is not the first time the US has actively engaged in Libya. Air strikes and even abductions of jihadists in Libya have taken place almost twice a year since 2013. According to the Washington Post, American special forces have been on the ground at least since late 2015, both in Misrata and Benghazi.

European special forces are reportedly present in both cities as well, and the recent death of three French agents while fighting alongside General Khalifa Haftar – a rival of the same GNA that France has helped to create – has sparked widespread protests in Libya.

So far, the US strikes have not created comparable levels of popular outrage, apart from largely unsurprising rebukes from the two sides that do not support the GNA in Libya – the rival government in Tobruk and the hardliners in Tripoli represented by the Mufti al-Gharyani.

Any Western intervention in Libya could be instrumentalised by those opposing the unity government. These are the same leaders that accept massive political support and arms deliveries from regional powers in violation of the existing UN arms embargo.

Few Libyans will shed tears if the US strikes in Sirte hit IS – an organisation that has failed miserably to win the hearts and minds of Libyans. However, the picture could get more complicated if the US ends up killing any of the few civilians in Sirte that have not already been displaced.

The coming weeks will tell whether this was the right choice from a military standpoint. The area controlled by IS in Libya has already shrunk in recent months from 9,000 square kilometres in May to fewer than 20 now. This vindicates those who have argued that Libyan ownership of the fight against extremists was crucial to achieving victory.

Contrary to many other US interventions in the region in the past two decades, Americans – and Europeans – are now responding to a local request rather than going in “before it’s too late” and then looking for local partners after the fight begins to drag on.

But military force alone cannot solve all of Libya’s problems. The US and Europeans should work now on a parallel political strategy, focusing on three priorities.

The first priority is strengthening the GNA. Despite all diplomatic efforts, Haftar, who effectively controls the government in Tobruk and Beyda, is unlikely to accept to serve under an effective civilian government. His regional sponsors in Egypt and the UAE are unlikely to accept a unity government that includes anything that seems “Islamist” in any way. This means that there wouldn’t be a unity government, and most likely not one working from Tripoli.

The door for Haftar and his supporters should always remain open, but they should not be allowed to hold the legitimacy of the GNA hostage just because they physically control the House of Representatives in Tobruk – the body that is supposed to grant the vote of confidence to the GNA, but has refused to do so since early February. So far, Haftar’s strategy has been to kill the parliament rather than let it approve a unity government that could fire or sideline him.

The GNA is supposed to be an interim government tasked with bringing the country to new elections. But in the meantime, Libyans deserve to have an interim representative body and, if the HoR is not working, a temporary solution could be to ask municipalities to designate their representatives for a national body that, together with the Political Dialogue (the delegations that signed the UN-backed agreement), would hold the GNA accountable. These representatives could include current HoR members, mayors, tribal and social leaders.

It is at the local level that Libya’s best engines of peace have laid in the past years. Empowering them is key to achieving stability and facilitating coordination between local and central authorities. This body would not need to be official to have political legitimacy. In Tunisia, both the Quartet and the different instances (informal committees for dialogue that also impacted policy) did not always have formal recognition, but they had decisive influence because of the players they represented.

This new Libyan body would not be legislative. Only the HoR can play that role if it comes to life again, but the new body could hold the government accountable and coordinate efforts to restart public services and solve the economic crisis – the two issues on which the life of the GNA ultimately rests.

Americans and Europeans should lend their support to this project or to variations of it, if it is agreed by Libyan municipalities and the GNA.

Secondly, while making sure that the unity government works effectively and with political, albeit not legal, legitimacy in the areas under its control, the West should make sure that the conflict in other parts of the country does not escalate, generating grievances and fighting in other parts of Libya. Benghazi is crucial to this end, because almost any large town in Libya has a community from or connections with the city of Benghazi.

While Western Libya has seen a growing trend towards local de-escalation, Benghazi seems to be spiralling out of control. In waging a diplomatic and local mediation offensive on Benghazi, Americans and Europeans could use the example of the recent agreement between tribes from southern Libya brokered by the Santegidio community. This agreement led parties to accept dialogue and cessation of hostilities in exchange for desperately needed humanitarian aid. A humanitarian appeal has been proposed by 70 prominent residents of Benghazi. This cause should be taken up.

Sirte, the day after

Finally, Western experience in Iraq shows the perils of being arrogant liberators – when those who conquer cities from IS or other jihadist groups fail to address the grievances and sense of exclusion among the local population.

Misrata has committed a lot of resources and lost hundreds of men to liberate Sirte, but it should be rewarded with the strengthening of the GNA, of which it is the main stakeholder. Sirte should be handed over to the local authorities and a working agreement to ensure reconciliation and security should be concluded before IS leaves the city.

Ultimately, Americans, Europeans and Libyans have to avoid complacency. The idea that Libya does not need any more high-level diplomatic engagement and a political strategy to be stabilised – a fantasy that will become stronger as IS’s territorial control continues to shrink – is wrong-headed.

Future efforts will have to focus a lot more on the local level; they should aim to save Libyans from violence city by city – sometimes even neighbourhood by neighbourhood.