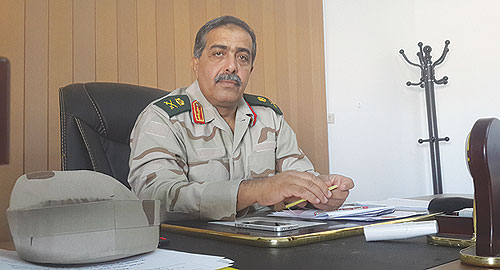 Benghazi Municipal Council has been suspended by Major General Abdul Razzaq Al-Nazhuri and its responsibilities transferred to Colonel Ahmed Al-Araibi who has been appointed military commander of the city.

Nazhuri was appointed military governor of northern Cyrenaica in June by House of Representatives’ president Ageela Saleh at the request of General Khalifa Hafter. He is also nominally Chief of Staff.

Al-Araibi is a currently a member of external security.

According to a source close to the Libyan National Army (LNA), the measure was taken because the council was not functioning properly at a time when, as he put it, “Benghazi is at war”.

It was a temporary emergency measure, he added, and the council would be reactivated once security in the city was fully restored.

Benghazi municipal councillor Anis Al-Majbri has welcomed the move, saying that it comes as no surprise. The work of the council had been paralysed by infighting over who should be in charge, he said. He accused Benghazi mayor Omar Barasi of not being there and doing little work.

He added that municipal councillors had met recently with Nazhuri to discuss the paralysis in the council’s dealings and that Nazhuri had said that he would appoint a military man to take over.

Two months ago, Barasi was sacked by his fellow councillors and replaced by Zakaria Beltamer. However, Barasi refused to go and was supported by Thinni who said that, given the situation in Benghazi, it was the wrong time to change mayors.

There are claims, however, that the real reason was that Thinni and the LNA did not want Beltamer to take over. He is reportedly sympathetic to the Presidency Council in Tripoli.