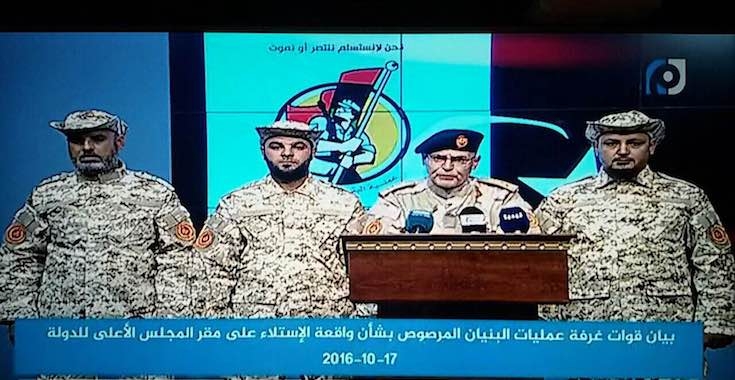 The Bunyan Marsous Operations Room has said it is wholly opposed to the Rixos coup by the rump of the General National Congress (GNC) and Khalifa Ghwell. The move was illegal, it stated, adding that the coup supporters were trying to profit from its own fight against the so-ca,lled Islamic State (IS) in Sirte.

Meanwhile, in a statement today declaring full  support for the Rixos coup, a ressurected Libyan Revolutionaries Operations Room (LROR) claimed that while the country was suffering harsh economic conditions, fellow coup supporters were fighting IS in Sirte.

Announcing its support for the Ghwell coup, the LROR called on all armed groups previously loyal to the former GNC to rally behind it once more. The GNC, it declared, was back in power.

However, ignoring the fact that the Ghwell “government” has almost no power beyond the immediate confines of the Rixos complex, the LROR urged that all revolutionaries to unite behind Ghwell and the resurrected GNC and defend the revolution against what it called plotters, traitors and those who wanted to divide the country. Unnamed international bodies were trying to split Libya, it claimed.

For its part, the LROR declared that its only objective was to bring peace to Libya.

“We confirm that we are supporters of peace and seek to build real state institutions,” it stated. “But if we have to fight, we will be determined,” it added.