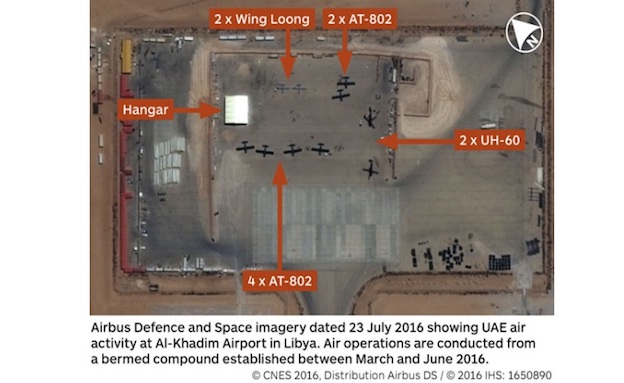 The United Arab Emirates (UAE) established a military base nearby the city of Al-Marj on the eastern side of Libya.

The IHS Jane’s 360 websites revealed that the UAE had set up the air base “from where it is operating AT-802 light attack aircraft and unmanned aerial vehicles (UAVs)”.

The location of the Emirati air base is Al-Khadim Airport in Marj, about 100 km from Benghazi.

The main reason for the UAE airbase is to support the Army affiliated to the House of Representatives (HoR) under the leadership of General Khalifa Haftar.

The website pointed that “there was a very little infrastructure at Al-Khadim airport at the beginning of this year, but this began to change in March when new buildings and work on a new aircraft parking area (ramp) could be seen in the satellite imagery.”

According to the website “by 27 June, hangars were under construction next to the new ramp, which had not been paved at that time. An operational area had been set up on the existing ramp where two Air Tractor aircraft, two UH-60 Black Hawk helicopters, two Il-76 transport aircraft, one Il-18 turboprop airliner, and two UAVs were present.”

This confirms what was released by the Shura Council of Benghazi on 26 September, which said that they were attacked by MiG-23 jets and Mi-8 helicopters operated by Haftar’s army and supported by Emirati AT-802 aircraft.

In a related context, Haftar arrived, on Wednesday, in Abu-Dhabi, on an official visit to UAE. The Emirati Defense Minister welcomed him. The visit was considered, by the UAE, as a formal one.

According to observers, Haftar’s visit to UAE, wearing civilian clothes, might reflect his desire to get rid of his army personality to start his first steps on the way to nominate himself for the first chance of presidential elections in Libya.

The observers stressed that Haftar is encouraged by his followers to think about ruling Libya, copying Al-Sisi of Egypt, who supports Haftar as well.

It is significant to mention that Haftar is still refusing to recognize the Presidential Council (PC) despite the efforts of the head of the PC, Fayez Al-Sarraj, to meet Haftar and find a solution with him to end the split in Libya.