Home / Normal / What is behind killings and explosions in Benghazi 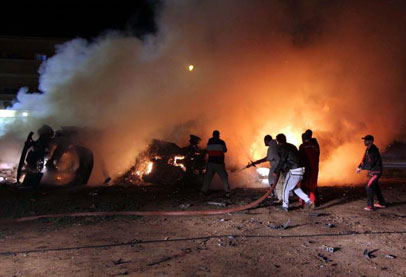 What is behind killings and explosions in Benghazi

The death toll of Al-Keesh Square explosion in Benghazi, which killed four dead and 17 wounded, concurrently with ten hands cuffed dead bodies found, one day earlier, in a dumber in Benghazi.

According to observers, the security scandals in Benghazi raises many questions about the absence of the security bodies that supposed to secure the city of Benghazi, which General Khalifa Haftar said that it was liberated.

The activist Osama Aljared asked, via his Facebook page, the competent authorities to collaborate with international investigation team to uncover all circumstances surrounding all explosions that Benghazi witnessed, which coincided with the bodies found with torture marks. He added that “those are all criminal acts, no event shall cap the previous as always happens.”

The social activist, Saad Amer, said, on his Facebook page, that “I was expecting random shells to hit Al-Keesh square or anywhere else in Benghazi, in an attempt to cover up the ten dead bodies found one day earlier.”

It is essential to mention that a bombing car exploded, late on Saturday, in Benghazi killing four people including the head of Anti-Corruption Organization, Mohamed Bogaeigis, wounding another 14.

The killing of Bogaeigis, who was an outspoken supporter of the forces led by Haftar, brings back to minds the leaks published on news media speaking about arrangements between the Egyptian intelligence and Haftar to initiate assassinations campaign in Benghazi against army officers and pro Haftar political activities, to let the accusations directed at Benghazi Revolutionaries Shura Council, which fights against Haftar’s forces.

And regarding the killing of ten civilians whose bodies found dumped in Benghazi, the killing method is similar to that used to kill the journalist Dhaif Al-Ghazal in 2005, at the time of Gaddafi, after publicly opposing the revolutionaries committees and Gaddafi regime, Al-Ghazal was kidnapped and then found killed and dumped, handcuffed with torture marks.

In the midst of such events, social media activists circulated a speech by a member of the Salafist group in Benghazi, affiliated to Haftar, demanded not to question Haftar integrity or intentions, saying that “God chooses Haftar for this war and whose who challenge him are Kharijites.”

He added that “those who question Haftar should repent to God, return to the right path.” Some might use this speech as a cover to justify crimes committed by Haftar and some Salafist elements, who are interested in eliminating opposition either Islamists, revolutionaries or civic activists.

This raises an important question; why Haftar insists on refusing the Presidential Council (PC) of the Government of National Accord (GNA) despite repeated call from the head of the PC, Fayez Al-Sarraj, and the international group to join talks and work to achieve political and military unity? And why is he procrastinating? Is he trying to prove the failure of the reconciliation so that he can provide himself as an alternative for Libya? Such suggestion is supported by Emirati and Egyptian support, especially after his latest visit to Abu Dhabi and revelations about the Emirati military base near Al-Marj on the eastern side of Libya.