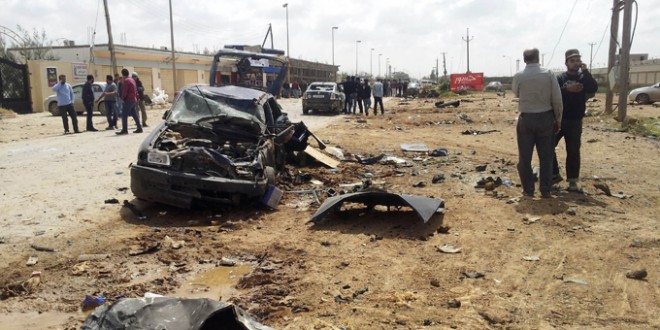 A blast in Libya’s eastern city of Benghazi killed four people, including an anti-corruption activist, and wounded at least 21 others, security and medical sources said.

The explosion on Saturday rocked the downtown Benghazi district which is lined with busy cafes. Mohamed Bugaighis, who headed an anti-corruption body, was one of the casualties of the attack. Three others, two Libyans, and a Bangladeshi, died in the incident and 21 were injured, according to the Libya Herald.

Bougages is a political activist and a fiery TV host of a daily talk show called “Frankly,” which is aired on state TV. He has been an outspoken supporter of General Khalifa Haftar, who has led a campaign against extremists in Benghazi since 2014.

Haftar opposes the internationally recognised Tripoli-based Government of National Accord (GNA), which launched operation al-Bunyan al-Marsous in May to retake Sirte from the Islamic State group.

An witness told Reuters the explosion happened close to Bugaighis as he was leaving his car to visit a cafe he frequented.

Bughaighis’s home was targeted in the past, in June 2014, by militants but he was not at home at the time.

His family have been prominent human rights campaigners. His relative Salwa Bughaighis was assassinated two years ago after voting in elections for the House of Representatives. Her sister, Iman, still campaigns for human rights, according to the Herald.

Earlier, a security official said the bodies of 10 men who appeared to have been tortured and shot dead were found in Benghazi’s Shabna suburb overnight between Thursday and Friday.

It was not clear who was responsible for the killings.

The area is under the control of Haftar’s forces.

After struggling to make progress, Haftar’s forces seized several key neighbourhoods earlier this year, though they still have not brought the city under full control. Although security has improved in the centre, fighting continues in peripheral areas and bombings against Haftar’s forces have persisted.

According to the Libya Herald, the blast and recent killings are sparking fears Benghazi could be returning to the assassinations of two years ago, as Islamist militants resort to guerilla tactics following their loss of territory.

The news outlet said that before Khalifa Hafter’s Operation Dignity was launched in Benghazi, political assassinations “seen as carried out by Islamists were a regular event.”