Home / Normal / Revolutionaries in Tripoli call for new national dialogue, warn of dangers to the city 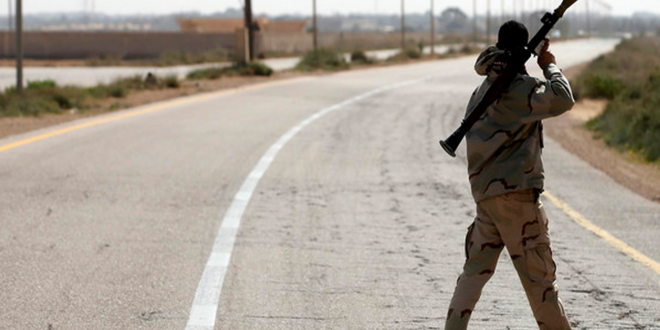 Revolutionaries in Tripoli call for new national dialogue, warn of dangers to the city

A group calling itself “The Brigades of Revolutionaries in Libya” rallied with several armoured vehicles in Tripoli’s Martyrs’ Square late yesterday afternoon demanding “all good Libyans” reject foreign moves to resolve the country’s political crisis. Instead they should unite behind national efforts to find a solution.

The rally followed an earlier, smaller protest after Friday prayers by some of the same group in the square, but minus the weapons and armoured vehicles.

The main rally was followed by a statement of their views on the Tanasah TV channel belonging to the controversial grand mufti, Sadek Al-Ghariani. He too supports national dialogue, firmly rejecting the UN-brokered Libyan Political Agreement and the Presidency Council.

While national dialogue was the goal, it was made clear in the televised statement that it excluded Khalifa Hafter and his supporters. The group, linked to the largely now Tripoli-based Benghazi Defence Brigade (BDB) as well as to other radicals operating in the capital such as Salah Badi, described him as a “war criminal”.

They said that their leaders were highly concerned about the deteriorating economic situation faced by Libyans and that they feared that escalated tensions could lead to a new civil war which would divide the country.

They also criticised the Presidency Council.

“Leaders of the revolutionaries had expected the Government of National Accord to provide people with services, security and to stop the bloodshed. But unfortunately, since it entered to Tripoli the situation has deteriorated at all levels, including an increase in kidnappings and killings, the rise of prices, the shortage of cash, the delay of start the school year and of healthcare services,” they said.

However, they rejected calls for public protests about this because it could lead to clashes in the city and worse.

“This call might lead to the destruction of our city in the same way that happened in Benghazi which was destroyed by the Dignity Operation led by the war criminal Hafter,” they stated.

Indicating the tie-up with the BDB, itself strongly backed by Ghariani, their statement also demanded the release of those “innocents” who had been arrested and imprisoned in Tripoli. This was a reference to members of the Benghazi’s Ansar Al-Sharia arrested and held by the Rada (deterrence) Force of Abdul Raouf Kara.

The group also condemned attacks on and seizure of governmental institutions – seen as referring to recent moves by Haithm Tajouri’s Tripoli Revolutionaries Brigade against buildings used the intelligence service but taken over by militants.