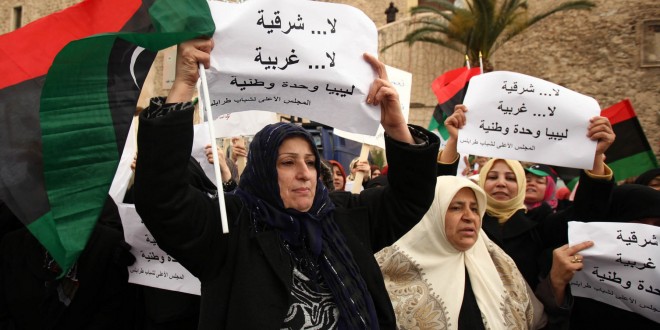 Female MPs from the House of Representatives are demanding a 30 per cent increase in women’s participation in all parliamentary delegations.

The United Nations Security Mission in Libya (UNSMIL) held a three-day meeting in Tunisia last week where some 31 women elected to the parliament in 2014 attended.  Political notes were compared with female legislators from Algeria, Chad, Egypt, Niger, Sudan and Tunisia in gaining experience for their own government in Libya.

Naima Dalef, a House of Representative member, said that by 2030, half of all elected representatives should be female.

Currently 31 members of the 200-seat HoR are female. Even without boycotts and low attendance at the parliament in Tobruk, it would be a difficult push to ensure that almost a third of all delegations contain women by 2030. The task seems near on impossible given that Libya has been unable to maintain a government that has been able to hold legitimate authority since Muammar’s Gaddafi downfall in 2011.

Under the slogan “Together We Can, Together We Work, Together We Advance For Peace” the HoR female members said they had examined legislation and oversight in regards to women’s blocs and networking and the building of trust and alliances within the present parliament.

The UNSMIL press release added “training, capacity development, exchange of best practices and media skills was common threads” to all these topics.

UNSMIL chief Martin Kobler said he congratulated the women on proposing practical steps during the conference adding that women are “key agents for change, peace and progress”.