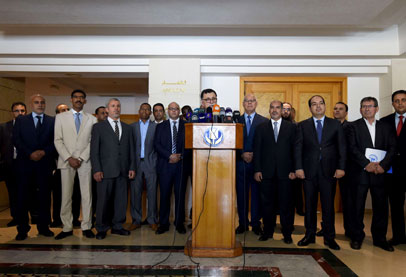 Faiez Serraj, the head of the Presidency Council, has appointed an acting minister and a deputy for the ministry of finance. He has also appointed deputy ministers for the foreign and local government ministries.

The move, announced last night, follows pressure on him during the London conference on financing the country a fortnight ago to appoint a minister and deputy at the finance ministry.

The Presidency Council (PC) initially appointed Fakhr Muftah Bufernah as finance minister but he, along with three other ministers, was deemed to have resigned by the PC at the beginning of July on the basis that he had never taken up his duties. (He and the others, all from the east, said they had not resigned but had not taken taken up their posts because they had not been approved by the House of Representatives.)

The new acting minister is Osama Hamad Saleh. He headed the office of PC member Fathi Majbri when Majberi was education minister in Abdullah Al-Thinni’s government. There are suggestions that Majbri who heads the PC’s financial committee was behind his new appointment.

Saleh’s brother Mohamed is one of the members of the House of Representatives for Ajdabiya. Both are said to be friends of Ibrahim Jadhran.

The new deputy finance minister, Bubaker Jafal, is also from Ajdabiya but is is reported being close to pro-Islamist Mohamed Ammari and to the Muslim Brotherhood.

It is thought that the ideologically balanced choices of minister and deputy minister will help smooth the ministry’s full cooperation with the Central Bank of Libya and so ensure the release of the LD 8.6 billion from the bank for the PC’s work, as agreed at the London conference.

The new deputy at the foreign ministry is Tarek Shoaib Bunasirah. Ironically he was until recently taking his orders from the Thinni administration. It appointed him last year as the chargé d’affaires at the Libyan embassy in Cairo after it sacked Mohamed Salah Al-Dressi after a week in office, although he then refused to go.

The new acting deputy local government minister is Abdulbari Ali Shanbaru. He is the brother of Amar Shanbaru, one of the eight HoR members for Zawia.

There have been suggestions that both Saleh and Shanbaru were picked because they would ensure support for the PC in the HoR.