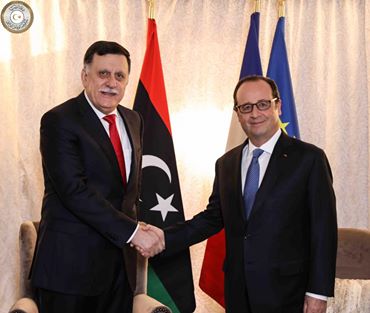 French help in training the presidential guard and on cooperation on security and the fight in Libya against the so-called Islamic State were at the centre of talks today in Marrakesh between Faiez Serraj, head of the Presidency Council (PC), and French President Francois Hollande.

Serraj is in Moroccan city for the African Summit taking place on the sidelines of the UN climate conference there, while the French president is there for the conference, organised to follow up on the Paris climate agreement a year ago reducing global fossil fuel emissions.

During the talks, Faiez Serraj briefed Hollande on the current status of events in Libya.

In separate talks with the UAE’s deputy prime minister Sheikh Mansour Bin Zayed Al Nahyan, Serraj thanked the UAE for its support for Libyan national reconciliation and for combatting terrorism in Libya. For his part, Sheikh Mansour said that the UAE would provide whatever help was needed to help Libya out of the present crisis.

In both the French and Emirati cases, their help so far in combatting terrorism has primarily been in Benghazi, providing help to the Libyan National Army led by Khalifa Hafter.

The Africa summit talking place alongside the climate conference is focussing on the challenges posed by climate change to the continent and on coordinating policies promoting sustainable growth.