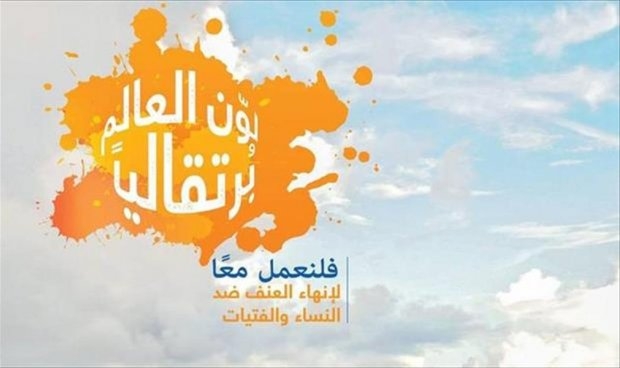 Between the 25th November and the 10th December, the United Nations Population Fund (UNFPA) Libya office, organizes a campaign in Libya to advocate and raise awareness on gender-based violence with the support of the Women and Youth Empowerment Forum (WYEF). The campaign involves many local organizations and institutions in all main municipalities throughout the country.

The activities include workshops and open discussions, trainings for health service providers and distribution of dignity kits. Inspired by the global campaign “From Peace in the Home to Peace in the World”, special attention will be given to the education sector by organizing peer activities in schools and universities for adolescents and young people. The aim is to develop recommendations for local and national policies and encourage dialogue, tolerance and respect between men and women within the family and at all community levels.

Gender-based violence is a major health and human rights issues, further exacerbated during conflicts where women and young girls are often more vulnerable and become victims of discrimination, harassment, sexual violence and exploitation with severe consequences on their mental and physical health.

The 16 Days of Activism Against Gender Violence is an international campaign originating from the first Women’s Global Leadership Institute sponsored by the Center for Women’s Global Leadership in 1991.  The campaign starts every year on November 25- International Day for the Elimination of Violence Against Women – and ends on December 10- International Human Rights Day- in order to symbolically link violence against women and human rights and to emphasize that such violence is a violation of human rights.

“This campaign shows Libya’s commitment to take concrete steps against gander-based violence and its involvement at international level to work for the eradication of human rights violations, ensuring equal protection and respect to both men and women” says Dr. George M. Georgi, UNFPA Country Director for Libya.