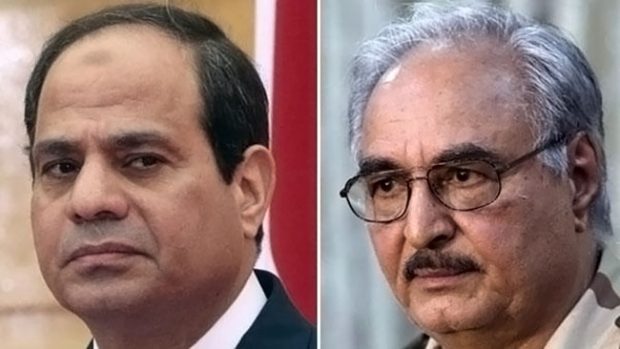 Will Egypt intervene in Libya?

Reports said that units from the Egyptian army had launched the biggest military live-fire exercises in the western desert, across the border with Libya, last Thursday, with the presence of the Egyptian Defense Minister.

According to Al-Tagreer newspaper website, the military exercises aimed to reviewing the decisions of the fighting formations and the unit commanders to address and eliminate aggressions, beside execute different live – fire training activities with the participation of all elements of modern weapons battle, which included a statement to raid border hotbed and to eliminate the armed elements before reaching the international boundary line.

The report questioned whether Egypt is intervening militarily in Libya, referring to a speech by the Egyptian President, Abdel-Fattah Al-Sisi in which he said that “there will be no other choice in the wake of Libyan people and government request for Egypt to move.” It added that Al-Sisi statements regarding Libya were somehow contradicting, as he stressed his objection to the international military interference previously while confirming his support for Haftar during a meeting with the French president, Francois Hollande.

The report also said that despite the fact that it is not the first time for Al-Sisi to confirm his support for Haftar and allied forces, such statement was seen by some as (a coup supportive) that reflects the duality of Egyptian handling with the Libyan crisis”.

From his side, the political analyst and writer, Waleed Artema, said that Cairo had dealt with duality with the Libyan crisis, despite its welcome for the Shkirat agreement, it supported Haftar with weapons and ammunition, and launched air strikes on Libya. He added that some Libyan parties expressed the official Egyptian position during the last phase of the political accord, by refusing to name Aref Khouga as the Libyan Interior Minister and El-Mahdi El-Barghathi as the Libyan Defense Minister.

In an attempt for Egypt to reposition, the State Council member, Mansour Al- Hassadi, said that the Egyptian President supports the Haftar coup process as an extension of what he did in Egypt. Al- Hassadi added that Al-Sisi is trying to import his political, economic, and security problems to Libya, considering Libya as the weakest regime in the middle east due to the political disintegration and Haftar war in Benghazi.

Al- Hassadi also said that Al-Sisi’s open support, either politically or militarily, to Haftar contradicts the political accord signed in Skhirat last December, and the international consensus on the need to a unified government to lead Libya and fight terrorism.

Al-Sisi, last August, appointed his relative, the chief of staff of the armed forces, Mahmoud Hejazi, to manage the Libyan file. The decision, according to sources, puts all security, military, diplomacy, and economic resources under his direct command.

The report added that the sudden presidential decision ended multiplicity of communication channels between Egyptian state institutions and parties to the Libyan crisis, and to manage the file within United Security Committee.