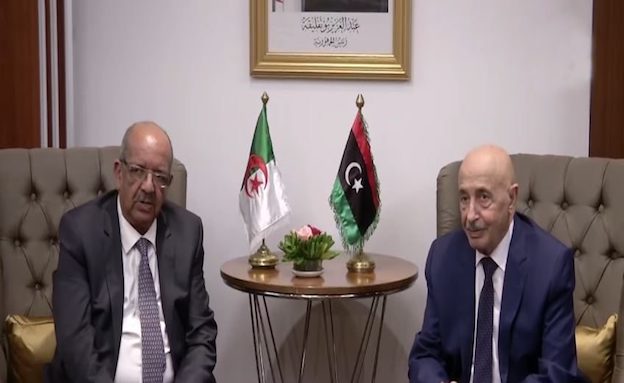 Algeria restored to indirect mediation efforts, two weeks before the due period of Shkirat accord expires, between the main parties to the Libyan crisis, the Presidential Council (PC) and the House of Representatives (HoR), as a last attempt to resolve the political and security complicated crises.

Algerian sources told Al-Wasat website that the head of the HoR, Aqeela Saleh, visited Algeria to carefully listen to the requirements and perceptions regarding solutions to the crisis, in the wake of mediation led by Algeria between Saleh and the head of the PC, Fayez Al-Sarraj, and other figures of the former regime and Islamists.

Saleh accepted the idea of reforming new the PC with the new configuration, according to the same sources, demanding reconsideration of the political accord specifically the article 8, stating that the Defense Minister to be assigned from the PC and the Government of National Accord (GNA). Algeria prefers political solutions through cohesive dialogue, without exclusion or foreign intervention, to achieve national reconciliation.

Within days, Al-Sarraj will arrive at Algeria to review his suggestions, in the light of efforts carried to complete difficult peace talks before mid-December, before the deal legal mandate expires, as future scenarios refer to possibly modifying or changing the accord.

According to the Political Agreement, its constitutional effects and mandate shall expire after one year from the signing and could be extended to another year on an agreement between all sides, but another extension is not possible, as some parties still refuse to recognize the deal. The United Nations special envoy to Libya, Martin Kobler, warned against the “expiry of Shkirat agreement, without entering into force, and if not implemented, the constitutional impact shall expire the end of December.”

Algeria accelerates the pace of forming cohesive, united “dialogue agenda,” for all parties, to avoid returning to the zero point, before the Shkirat agreement. The Algerian Minister of Maghreb Affairs, the African Union, and the Arab League, Abdelkader Messahel, said that “they listened to all Libyans concerns, after various visits and meetings with Libyan officials arrived lately to Algeria, latest of which was the visit of Saleh.”

According to Messahel, Algeria is pursuing the same track with all Libyan parties to resolve the crisis, and restoring peace and stability, along with neighbor countries and UN organizations “to but one agenda based on dialogue, national reconciliation, defending the unity and national sovereignty.”

Saleh’s visit to Algeria included the security perspective, the official support to arm the Libyan army, providing it with ammunition and. Saleh conveyed growing fears in the eastern area of the growth of armed groups and informed the Algerian officials of the sensitive situation in Libya, but he tried to comfort Algerians regarding security threats across borders with Libya.

The visit also intended at pushing Algeria to interfere to provide Haftar army with weapons. But Algeria looked cautious in dealing with the internal matters of Libya, refusing to support one party over the other inside Libya.

All the previous cases make the issue of arming Libyan army a “subject of reservation” for Algeria until Libyans agree on a united political body and military.

International Relations and CooperationPolitical Transition
All
2016-11-30
asaeid
Previous Human trafficking from Libya to Europe surging, becoming deadlier
Next Dabbashi bows out of UN with bitter attack on UNSMIL