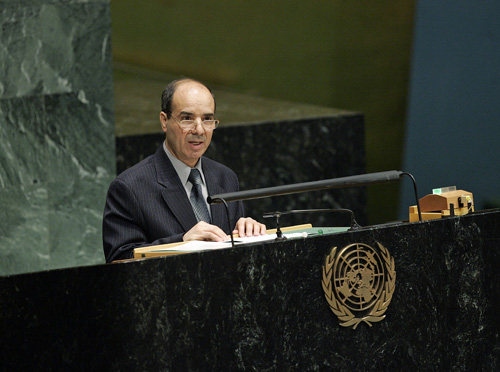 Representative from Lybia addresses a United Nations Conference on the World Financial and Economic Crisis and its Impact on Development.N

Dabbashi bows out of UN with bitter attack on UNSMIL

Ibrahim Dabbashi has protested to Secretary-General Ban Ki-moon that Libya was under an undeclared trusteeship  under the UN umbrella led by a “Troika” made up of UNSMIL chief Martin Kobler “ and two unaccredited ambassadors who are taking decisions on behalf of the Libyan people, assisted by a dialogue committee dominated by foreigners of Libyan descent and radical Islamists, who lost the elections and people’s sympathy in Libya”

The much-fired but long-serving UN envoy also protested to Ban that he had been thrown out of the  New York headquarters building by UN officials.

In a farewell letter to “ Excellency and dear friend” Ban,  Dabbashi said that his ouster was illegal because Faiez Serraj’s Presidency Council did not have the power to dismiss him until a GNA had been accepted by the parliament in Tobruk.

While insisting that he supported the Libyan Political Agreement that had brought the PC into being, Dabbashi said that Ban’s backing of his firing by Serraj was tantamount to immediately legitimising any appointments made by Ban’s designated successor, Antonio Guterres who does not take up his job until the start of the New Year.

Dabbashi wrote that he, along with most Libyans was astonished at the careless behaviour of UNSMIL in violating the terms of the Libyan Political Agreement.   He maintained that UNSMIL had encouraged the violations by delaying “the implementation of security measures and recognising non-consensual and unlawful decisions of the PC”.

He also condemned the UN for dealing with the High State Council which had been set up before parliament had approved the LPA and for encouraging the PCC to rely on militias for its security.   He singled out UNSMIL chief Martin Kobler for criticism saying that he should have not have made statements discrediting the Libyan National Army and its war on terror in Benghazi and Derna.