Home / Normal / Sirte’s battle against IS winds down, but uncertainty prevails 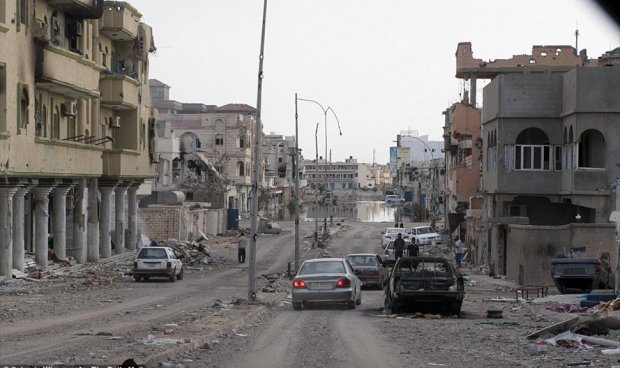 Sirte’s battle against IS winds down, but uncertainty prevails

Omar is 30-years-old with a wife, a 2-years-old son and another one on the way. He worked as a barber for many years until the Islamic State group arrived in Sirte, where he lived, and forced him to stop work.

Today, Omar has a barber shop in Misrata where he lives with his family. He is one of thousands of families who fled Sirte during the time of IS’ draconian rule of the city.

When his store closes in the evening, Omar recounts tales of IS’ two-year occupation of Sirte following a clandestine agreement with local jihadi-inspired militia, Ansar al-Sharia.

“When IS arrived in Sirte they found everything ready, because for months their allies in Ansar al-Sharia acted in the shadows, especially in the al-Nawfaliyah area. After the revolution a lot of people felt abandoned in Sirte and the men of Ansar al-Sharia at the very beginning helped us,” he said.

“They did all they needed in the city, they brought water where there was none, they bought ambulances, cleaned the streets, and brought gifts for children during Ramadan. Ansar al-Sharia was a form of redemption and protection for a city that seemed to carry on its shoulders the shame of history.”

The alliance with Ansar al-Sharia allowed IS militants to quietly plan the occupation of the city, while their allies prepared the way by providing welfare to citizens who felt abandoned after the revolution.

Throughout 2013, Ansar al-Sharia provided security in several areas of the Gulf of Sirte – from al-Nawfaliyah to Bin Jawad – and solved disputes between different tribes and clans. They organised charity collections for needy families and offered food for Iftar (the evening meal that breaks the Ramadan fast) to all the city’s poorer citizens.

Although IS had won the support of Ansar al-Sharia in October 2014, the militants alligned to Abu Bakr al-Baghdadi only began to come out of the shadows the following January. The first parades began with militants on the back of pick-up trucks and black flags associated with the group fluttering throughout the city.

Then the escalation of IS’ appearance in public became unstoppable: in February the militants occupied a radio station, the Wataniya television channel, Ibn Sina Hospital, the university and the city’s crucial aqueduct.

Omar said that at first IS did not impose a strict interpretation of the law but things changed after the first public executions.

“I perfectly remember the first two executions I witnessed. The first of a man, hung on Zafaran roundabout, who was suspected of being a spy for the Libyan army. The second was of an elderly [person] accused of witchcraft. After those executions a veil of sadness and fear fell on Sirte,” he said.

“One day they came into my shop, they told me to go to a Sudanese [man] who would teach me how to comb hair, and how to cut beards.”

Omar says that when he went to the man he first questioned him on the Quran and then instructed him on how to – and how not to – cut beards.

“Two months later, one of them [militants] came into the shop and told me that if he saw a single [trimmed beard] in Sirte he would cut my head. That day I closed the shop and I have not opened it since.”

Omar said that at the end of every prayer IS fighters questioned local boys. When they realised that one was particularly fond of religious ideas, they took him under their wings and told him how to battle “the infidels”.

The group also founded their own court to impose IS particularly strict interpretation of the law. At first the head of the court was a Libyan, but then a Nigerian militant took over.

A friend of Omar’s was caught smoking, and they arrested the man and jailed him for a month. It was there he witnessed the group’s indoctrination of prisoners.

“They whipped him and forced him everyday to watch hours and hours of video showing how the Islamic State [group] was great in Iraq and Syria. The videos showed how to build a bomb, and how it was right to blow [oneself] up and die in the name of Allah. It was their propaganda.”

Omar said that IS imposed taxes on each shop – including his own – to finance the organisation. Above all, they stole from the city’s banks – million Libyan dinars.

Mohammed al-Ghasri, spokesperson for the military force looking to free the towns Sirte, Bunyan to Marsus explained more from his base in Misrata about how IS funds its operations in Libya.

“We have evidence that during last year, IS began to smuggle weapons and fuel. Part moves towards Malta and part moves to the desert,” he alleged.

He said one of the anti-IS’ force’s chief concerns is that dozens of militants have moved to the south of the country and many more could follow. Once they are defeated in Sirte, he fears they could attack other cities in Libya to “show they still have strength and consensus”.

In fact, the victory in Sirte – now sure – will not guarantee the end of IS in Libya. There are already signs that IS might be moving to other parts of Libya.

Just a week ago there was an attack in Khoms and a few days ago – according to a source of Libyan intelligence – US forces bombed an IS convoy of 14 vehicles trying to reach Sirte from Beni Walid.

Another of the problems that Libyan authorities face is how to help displaced families.

The country’s economy is collapsing, while cash is running low which is needed to pay anti-IS troops and reimbursements for soldiers wounded on the frontlines or the families of the dead.

Roudha is a woman who is alone with three small daughters to raise. She lived in Sirte until two months ago she moved to Misrata, and she has been left with nothing – no money and no documents.

She cannot talk to her husband, and no one helps them in Misrata.

“I went to the bank the other day to ask for a bit of money to help my girls, and the official just told me that in Libya there is no more money for anyone, not just for us who have lost everything. He told me that cash is running out. ”

Roudha spends her days on the streets, and at night she sleeps with her daughters in one room made available by a family from Misrata.

She doesn’t even have enough money to buy jackets for her sons.

“Since the offensive began our lives became a hell [of a lot] worse than before, and I could not feed the children every day or leave the house. As a woman. my life was over when they arrived,” she said.

“When we got away I was hoping someone would help my little girls. Instead we are here and no one supports a woman alone who has nothing.”

Security Situation
MisrataSirte
2016-12-04
asaeid
Previous No military intervention on the table for Libya: Kerry
Next Abused, pregnant and behind bars: Former IS slaves in Libyan prisons