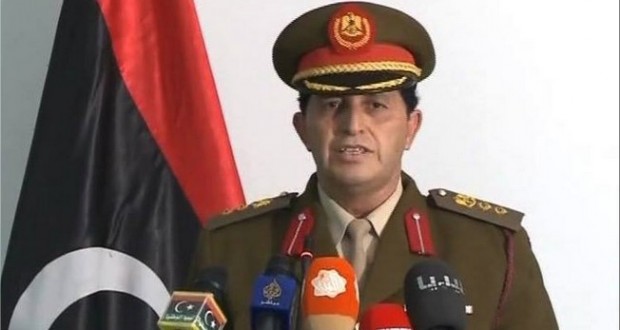 IS terrorists have gone nowhere outside Sirte, military intelligence says

The Military Intelligence Chief, Brigadier General Ismaeil Al-Shukri, has denied what he described as rumors about the escape of IS diehards out of Sirte.

In a televised statement, Al-Shukri confirmed that regional countries, together with countries that have political and economic interests in Libya, are involved in sponsoring IS radicals in Libya.

“Preliminary investigations startlingly showed the involvement of international parties and “dubious stakeholders” in supporting IS military presence in Sirte.” He added.

He remarked that the investigations led to some documents and footages that proved that the making of IS in Libya was orchestrated overseas.

Brig. Gen. Al-Shukri unveiled that most of the IS diehards who came to Libya were from Tunisia in the first place followed by Egypt, Sudan and then Nigeria, in addition to some other countries, adding that regarding the cities from inside Libya, Derna came first followed by Benghazi, Sirte and then Bani Walid.

“The real war on terrorism in Libya has always been in three cities, Sirte, Derna and Sabratha.” Al-Shukri concluded.